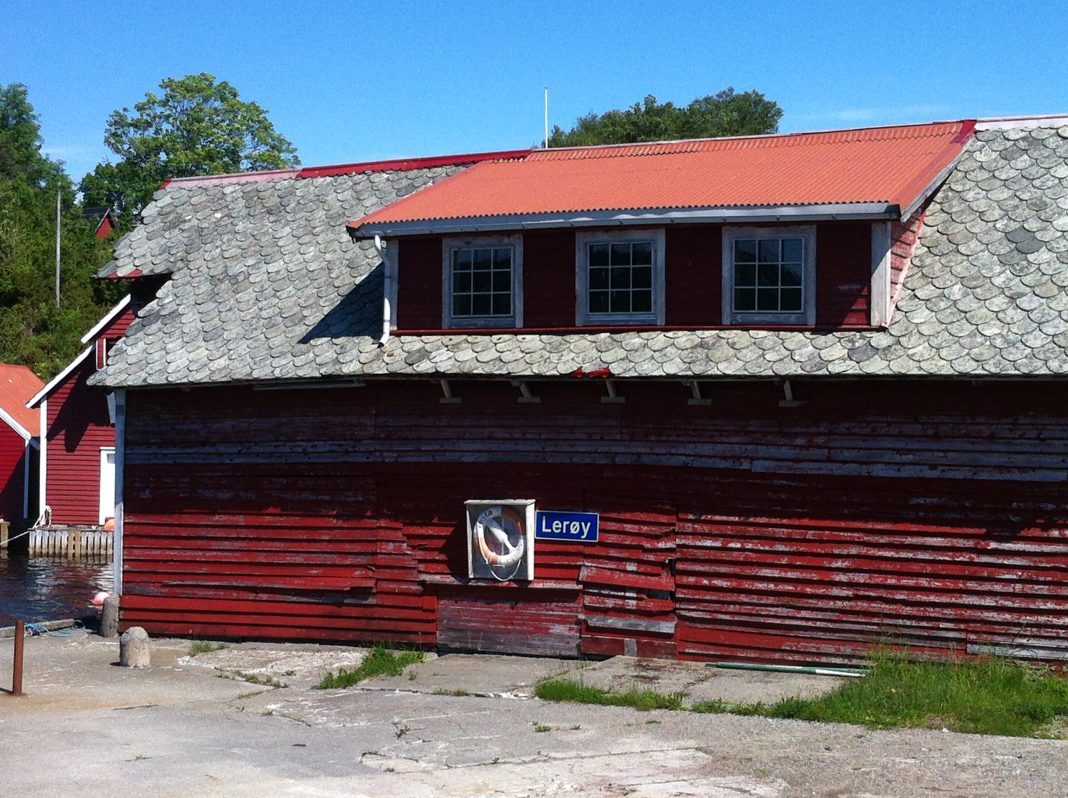 The name alone conjures up images of delectable, fresh seafood. In Belgium and France it’s most usually known as Le Roi, in Norway it’s associated with the world’s second largest salmon producer, and the chairman of the world’s number one salmon production company. The small island of Leroy lies wedged in between Sotra and Hjellestad, close to Bergen Airport.

Leroy is clearly visible from the air when flying into Bergen from the south. If you want to see it at closer quarters, it’s easier to take the ferry between Klokkarvik and Hjellestad.

Just five minutes afterr leaving the ferry landing at Klokkarvik, south of Sotra, the “Sundferja” ties up at Leroy quay. Five or six vehicles roll on board. Summer tourists from Bergen, as that is what Leroy stands for now; a cabin paradise for Bergen locals. Likewise for the Leroy family, which owns several cabins on Leroy.

That’s when the 20-year old fisherman Ole Mikkel Leroen used to row the 12 nautical miles from Leroy to Bergen towing a large floating crate full of live fish, several times a week. The trip normally took eight to twelve hours, depending on the weather and winds, to the Bergen fish market, according to the book, ‘Det beste fra havet gjennom hunger år’ (A century of (harvesting) the best from the sea).

Besides the many holiday homes, there are obvious signs of past military activity on Leroy. With its strategic position in the midst of the main seaway into Bergen from the south, Leroy Coastal Fort contained both torpedo batteries and a mine station.

Ole Mikkel Leroen fished and also took care of sales. After a while he was able to afford a bedsit in town, and started his own seafood business. It was when his son Hallvard Leroy established the export firm with the same name in 1939 that Leroy (the company) ventured out into the wide world. Over the following decades this company developed into the country’s biggest fish exporter.

In 1969 Hallvard’s son Hallvard Jr took over the helm as CEO.

Just before the turn of the millennium the company returned to its roots, and bought into the marine farming segment. By then a new generation was firmly ensconced behind the wheel. Under Ole-Eirik Leroy’s leadership Hallvard Leroy AS was transformed from a large, but financially limping fish exporter to one of the world’s biggest integrated seafood enterprises. The company was now called Leroy Seafood Group.

The Leroy family sold out of the company during the global financial crisis in the autumn of 2008, following a hostile takeover by Austevoll Seafood. Austevoll Seafood has its headquarters at Storebo, a short boat trip just across Korsfjorden, south of Leroy.

Ole-Eirik Leroy left the company, and was later appointed as chairman of the Board of Directors of the competitor, Marine Harvest.

Today only his younger brother Knut Hallvard carries on the Leroy family’s proud traditions at Bontelabo in Bergen.

With a market cap of € 3.3 billion the Leroy name is well and truly in the best of health. Notably the essence of the company’s strategy is the same as it was 114 years ago: sea-fresh seafood of most excellent quality.