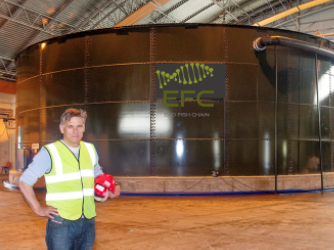 New company says it’s working with of one of the world’s biggest supermarket chain, an OBE professor and The University of West Scotland. It’s also seeking GDP 3.6 million to commence the second phase of the project.

Arve Gravdal, who founded the tech for grounded hangar RAS project, and is now looking to commercialise integrated land-based salmon farms and energy projects with EcoFishChain.

Gravdal, is the founder and chief operating officer of RAS company, Niri and the subsidary company, RAS Scotland, which was establised to operate a pilot plant to grow 40,000 tonnes of salmon in 2015.

Together with Terje Mikalsen (78), a multimillionaire entrepreneur and investor, Gravdal is working on a new new venture called EcoFishChain, as confirmed on his Linkedin profile.

Niri Scotland has now changed its name to EFC Scotland. Gravdal aimes to use CO2 and Hydrogen to produce organic feed ingredients for fish feed and says that it’s planned ready for use by 2021.

The company have hired Fearnley Securities to help look for GDP 3.6 million investment for the project.

On the EcoFishChain site, the company states that that electrolyser technology provider, Hydrogen-Pro as well as high street giants, Mark & Spencer London are involved in the project. It’s not yet clear how the high street store is supporting the project.

The company also appears to confirm that the world’s biggest land based tank for salmon is ready to be put in use to optimise the tech. It’s not yet sure it this is to showcase or hire out the facilties.

Furthermore, EcoFishChain have developped a digital platform that includes blockchain based security solutions to monitor the aquaculture process.

The company also say that The University of West Scotland will be setting up a lab facility at the EFC-plant in Campbeltown.