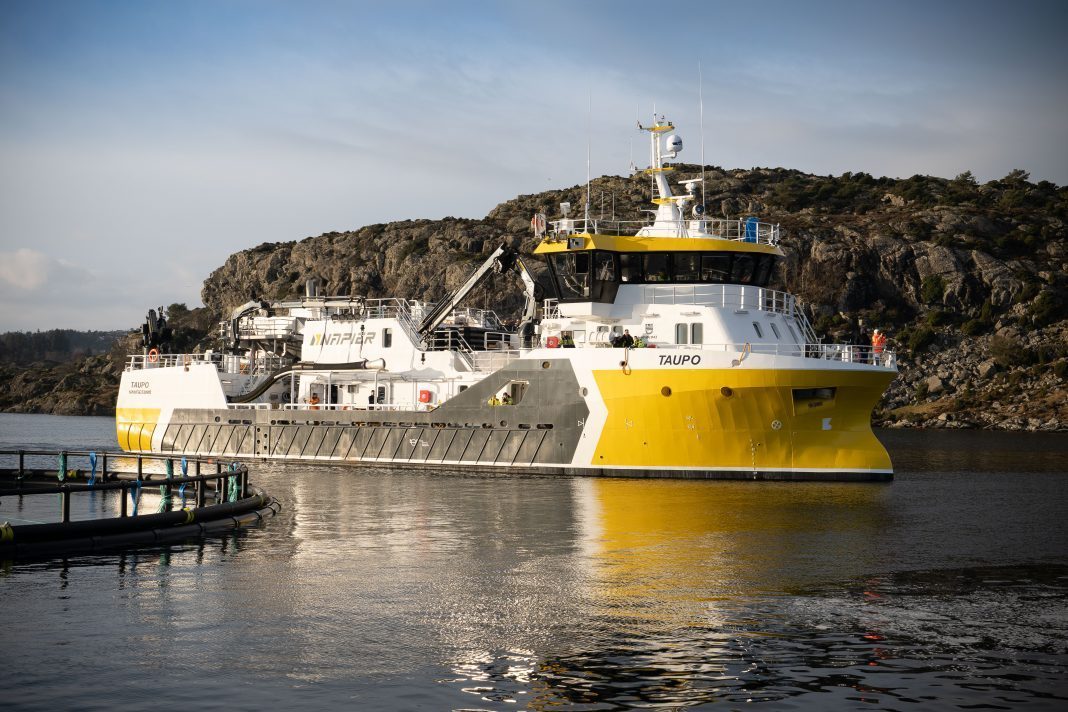 “Taupo” is the first boat in a new series of harvest vessels developed by the shipping company Napier in collaboration with ship designers Heimli and the shipyard Fitjar Mek.

The company first started to toyed with the idea of wellboats back in 2001, and was first to develop new technology when it came to loading salmon. “Tauranga” was extended and rebuilt in 2008 and became the first vessel of its kind in Europe.

The shipping company has ten years of experience with the vessels that harvest, process and keep salmon cool before transporting it to plants. After further developing the concept for ten years, the company is now ready with a new boat, tailor-made for the task.

‘It is primarily the biological safety of this type of vessel, where everything happens closed and nothing is released to the surroundings,” said Napier CEO Kjetil Tufteland in a press release.

Fish welfare
“The solution provides good fish welfare with less stress for the fish and very efficient transport. Here we do not transport water with some fish in. It is the fish that make up most of the volume. So we also know that the quality of the end product is first-class,” said Tufteland.

Prior to the baptism, Napier and Amar Group had invited guests to a demonstration of “Taupo” where the boat picked up salmon from a pen on Thursday and Friday it delivered to Espevær Laks processing plant on the west coast of Norway.

The “Taupo” concept has piqued interest far beyond Norway. In addition to industry people from Norway, there were participants from Canada, Chile, Spain and Tasmania. Friday was also set aside for a subject seminar at a local venue with about 60 participants, where a number of lecturers highlighted various aspects of the process boat concept and showed results from the research that was carried out.

Ordered several boats
Amar Group, founded by Steinsvik’s Bjørn M. Apeland, owns 25 percent of the shares in Napier. Amar Group has also ordered several harvest vessels in this series and will sell these in international markets.

“I strongly believe that this is the future way of transporting salmon from cage to slaughterhouse,” said Apeland. “The fish are harvested fast, lowering stress. This provides a better quality of the end product and one avoids the loss of fish during transport to the plant. I believe Napier’s harvest vessel technology has great potential in other countries as well. That is why we at Amar Group have ordered two boats from Napier and FMV,” said Apeland.