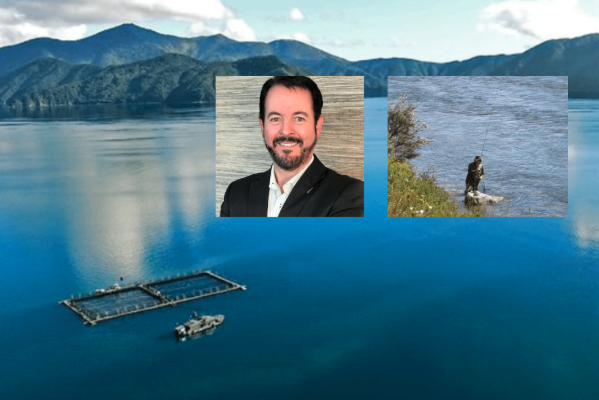 The CEO of New Zealand made the comments in an op-ed in scoop.co.nz on Monday.

President of the NZ Federation of Freshwater Anglers Graham Carter has criticised pine monoculture, pesticides, changes to Resource Management Act and dairy farms. Carter also had strong words (and a petition) on the potential lift on the ban on commercial trout farming.

However, it was Carter’s Salmon Move is Shifting Goalposts op-ed criticising the salmon farming operations in the Marlborough Sounds that caught Rosewarne’s ear.

Carter said that: “Having polluted the Marlborough Sounds, King Salmon with heavy Malaysian shareholding, think they can shift their operation to Cook Strait area by placing huge underwater salmon paddocks under the channel.”

“When the huge environmental damage caused by fish farms worldwide mainly through pollution under the farms is well documented, the proposed move by King Salmon is just moving the goalposts and leaving a very muddy field in its wake.”

However, Rosewarne responded with: “I stand by the statement that finfish aquaculture has the potential to become New Zealand’s most valuable industry and its greenest primary industry. Salmon farming is one of the most efficient forms of animal food production in the world, and we categorically affirm that our farms are managed in balance with the environment.

“The NZ Federation of Freshwater Anglers have misunderstood a lot of New Zealand King Salmon’s farming practices and have made the mistake of assuming that fish farming in other countries can be directly compared to New Zealand. The article makes allegations about our farming practices that are unsubstantiated and incorrect.”

The CEO went on to reply to each one of Carter’s criticisms and invited him to visit one of their farms. “We have nothing to hide,” he added.

SalmonBusiness has contacted Mr Rosewarne to confirm if the invite has been accepted.