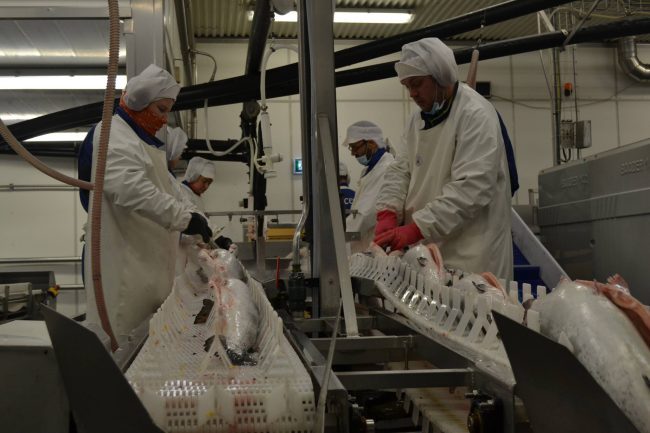 The Norwegian method of saving a processor not wanted by its large owner could serve as inspiration for those trying to save Scotland’s Pinney’s, where the salmon line awaits a white knight.

Some 45 jobs were lost, when salmon farmer, Cermaq, decided to close a processing plant in the Township of Oksnes, Northern Norway. Mayor Karianne Braathen wasn’t impressed by the Cermaq exit.

At Anan Scotland, many seem intent on saving the 450 jobs under threat, as Young’s Seafood abandons the local salmon line to keep a key Marks & Spencer seafood contract in Grimsby, England. Anan’s sons, including a DJ, have looked for ways to solve the void caused by the sudden departure of the town’s largest privately owned employer.

In the Norwegian case, the mayor and others rallied around the owner of two smaller aquaculture companies, Oytrans and Myre Havbruk, who got permission to buy the unwanted Oksness processor for 17 million kroner, about EUR 1.7 million. After a purposeful convening of the town council, it was decided that a EUR 300,000 business loan would be loaned to Viking Innovasjon, a business entity newly registered to buy the plant.

In 2016, Myr posted a thousand-kroner pre-tax loss. Oytrans had good cashflow but posted a negative EBIT of EUR 400,000.

“We’re very pleased the company took the initiative to do something with the (Oksnes facility). It’s something we in the Township see as positive, and that’s why it isn’t difficult to go in and grant them a loan,” Osknes Mayor, Karianne Braathen, told newspaper Bladet Vesterålen.

The newspaper said the new owners will borrow about EUR 900,000. Cermaq has offered these new buyers a “seller’s credit” of about EUR 500,000.