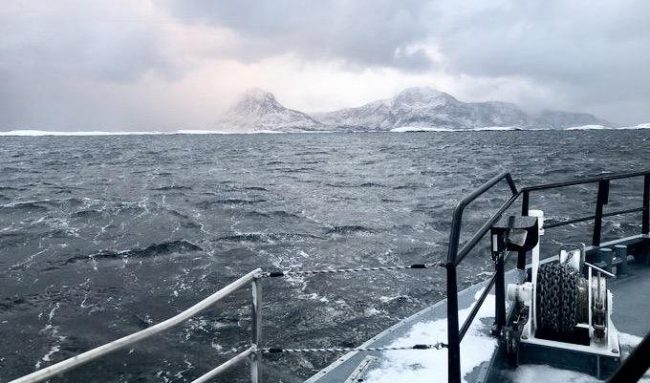 Vessel belongs to salmon farmer Lovundlaks. “We continue the action as a rescue operation, and as long as we do so, there is always some hope of finding the person alive”.

One person has been flown by rescue helicopter to the hospital in Bodø, Northern Norway , but one person is still missing.

On Friday afternoon, a 28-foot-long work boat was capsized in 30 knots of wind and dense snow in Nordland, Northern Norway. There were two people on board the boat, writes Helgelands Blad .

One missing
“A person has been rescued and flown in to the Nordland Hospital for further follow-up,” reported the Chief Rescue Center to the newspaper. “One person is still missing”.

The condition of the former is stable.

Since Friday night, around 15-20 boats including a Sea King helicopter have been searching for the missing person in the area.

The work boat was picked up by the service vessel “Nautilus Aldra” from Seløy Underwater Service, Helgelands Blad informed from people in the area.

The wellboat “Ro North” and the rescue boat “Odd Fellow III” are among the vessels participating in the search for the missing Saturday morning, according to Marine Traffic.

The work boat is owned by salmon farmer Lovundlaks.

According to Yr.no, there was gale force building up from the northwest in the area Saturday morning, with temperatures around the freezing point.

On Friday, Rescue Leader Rune Danielsen of the National Rescue Center in Northern Norway told NRK: “We will start again as soon as it lights up. We continue the action as a rescue operation, and as long as we do so, there is always some hope of finding the person alive.”

“One employee missed, one rescued from the sea. Lovundlaks can announce that one of our employees is still missing after a work boat capsized on Friday afternoon. The two employees were on board the boat, which was on its way from the Mustvær site and to Lovund when the accident occurred.

“One of the employees was picked up from the sea and transported by helicopter to the hospital in Bodø. Immediately after the report of the accident, a large-scale rescue operation was implemented. Lifeboats, helicopters, ambulance boats, fishing boats, ferries and other players participated together with Lovundlaks’ employees and boats. The search is today, Saturday, expanded and the action is ongoing. My thoughts go first and foremost to the next of kin,” said Lovundlaks CEO Jacob Meland to SalmonBusiness.

“We will do what we can in connection with the search, and I can assure that we have put in what is available of our own and other resources. For the sake of the ongoing action, no further comments are currently being made. We will come back later with a new update.”