The gold rush continues into next week.

“We try to keep the price that is out in the market,” said a buyer, and described the market as “hesitant”. “If some gets it cheaper; that does not mean that there will not be very strong prices. Many have said that it will weaken, but I am not sure,” he said.

“Not many sellers are desperate here,” he said about the fish farmers who are currently catching an operating margin of around 50 percent.

The market is characterized by a tight supply side. There is not much fish that is offered to a burning hot demand side.

“It has been lower and higher during the week,” he said about the price. “And it is of course very ugly for many of our customers. One does not hope that the price will be many and 90s (kroner) for long, I do not think we have benefit from that.”

“There is also little fish out of Scotland, the Faroe Islands and Canada. It is difficult to see what will lower prices far from this level in the next couple of months.”

What about demand destruction?

“In the US, there are no signs that this has reached consumers yet, the same applies to the UK and Germany. The middlemen take the hit. Demand destruction is different this year, since all competitors in the protein category have higher prices. It will come eventually, but I’m not sure to what extent it will hit. 80+ (EUR 8+) is easy to imagine for a couple of months, because demand destruction will not be a significant part during that period. Consumers who have high electricity prices and high inflation, maybe they eat vegetables?” he wondered. 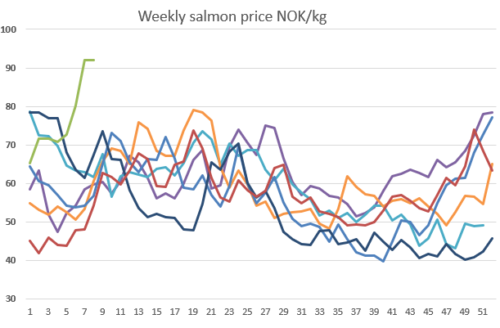 Desperate
“For some (processing companies) it is cheaper to take the fee from the customer than to buy at this level. But then you burn some bridges, you will not come in back in three months then. That said, there are probably many desperate processors now.”

Several traders SalmonBusiness has spoken to refer to a farmgate price in the EUR 9s for the most traded weight classes, between three and six kilos.

“It is not easy to sell fish at these levels here. We do not have unlimited customers – and credit insurance,” said one exporter.

However, he referred to prices in the mid-80s, and “a little higher on big fish”.