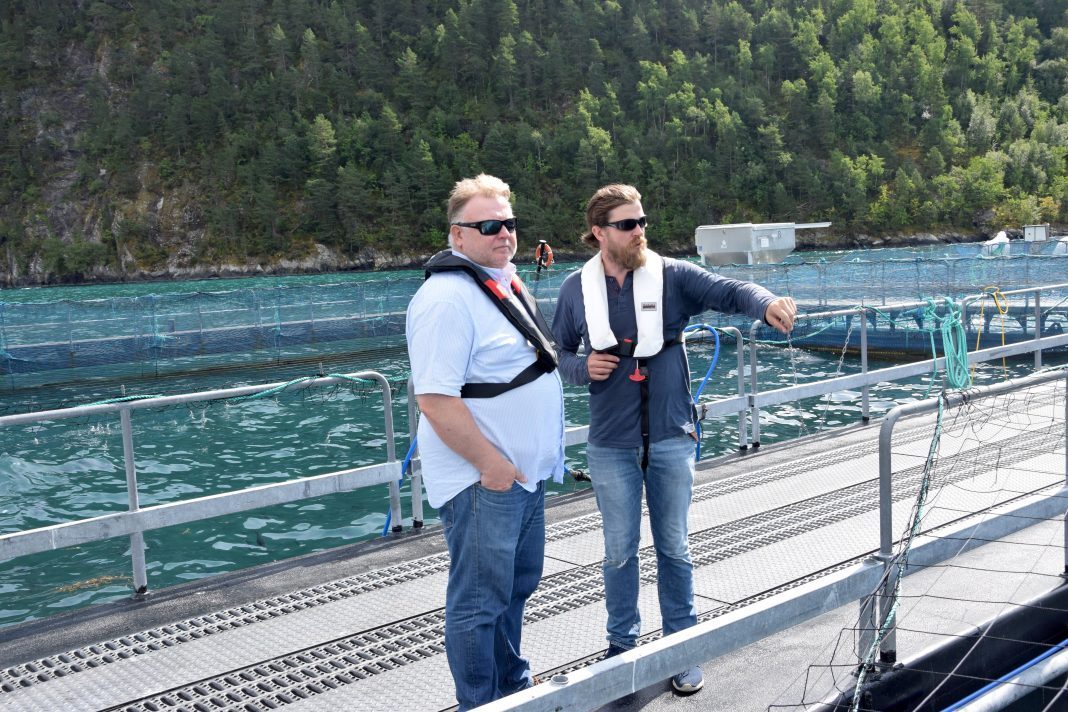 “Not enough research has been done on aquaculture. We are now collecting as much data as we can, and will use it to figure out how to optimize each smolt exposure”.

Hofseth Aqua Chief operating officer Svein Flølo, looked over the cage edge and down in pen number six at the Opshaugvik fish farm in Storfjorden in Møre og Romsdal, Western Norway. By his side is location manager Severin Rønes. They both look at a small trout swimming by itself, in a pen where most of the fish are much, much larger.

“This smolt exposure has a few of these “runt fish”. They eat minimally and do not grow like the others in the pen do. We just have to take them out of the pen when we see them,” said Rønes.

In pen number two, only a few meters away, the sibling fish to this smolt exposure detains. Both the smolts from pen number six and pen number two come from Hofseth Aqua’s new smolt plant. They come from the same batch and were released almost simultaneously. But in pen number two there is no “runt” fish.

“We simply don’t know why it is like that. That’s one of the things we want to find out. That is why we are now collecting as much data as possible and will use it to find out how we can achieve the best possible result every time,” said Flølo.

All parameters
Flølo estimated that a maximum of 10,000 of a million fish ends up as “runt” fish.

“It’s not very much, but the potential for improvement is definitely present,” he said.

And they will achieve improvement through the systematic collection of all imaginable data.

“If you ask a fish farmer what they did to get good results, they do not have any good answers. At least not the answers we are looking for. They answer that they do as they always have done, and every fish farmer has different methods. We want the proven and research-based best method,” said Flølo, before explaining.

“Say you put out smolt in the middle of winter. What were the salinity, temperature and flow conditions in the water at that time? How about a similar release in the summer? When you got results, what did you do? It is not certain that what you did in the winter should be done in the same way in the summer, and so on. We will collect all this and more, down to the smallest detail,” he said.

Oxygen
On the other side of the site, a white buoy floats in the middle of a pen. Around the buoy the water is greener than usual.

“Here we are conducting an experiment where we add oxygen in the water when oxygen saturation is low,” said Rønes.

Two pens further afield float a similar white buoy, but here the water around the buoy is not green in the same way.

“There can be differences only in such small areas. The pen between these and the one beyond are the ones we are comparing to see if we achieve anything with the addition of oxygen. These kinds of experiments make it exciting for us who are working on the edge of the cage. We have no specific results or data yet, but what I can say so far is that it looks like the fish in the pens that get oxygen eats and grows better,” said Rønes.