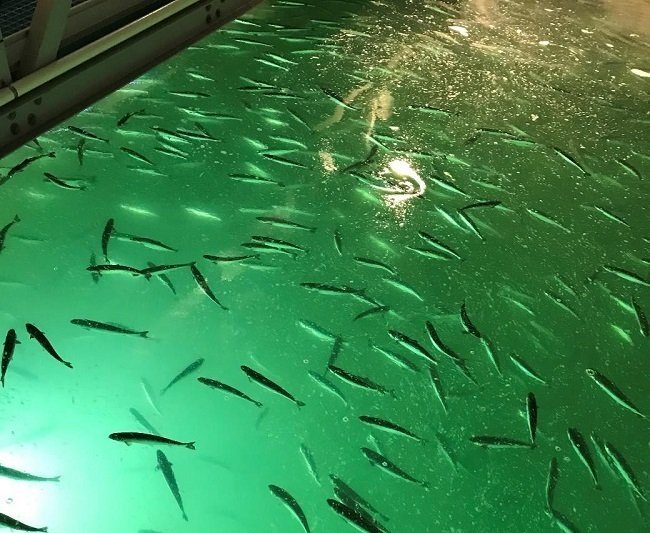 A second mass-death event yields no closure or cause.

“Fish are fainting. Respiration is very fast. It doesn’t look like any of the fish are behaving normally this Monday morning,” Marine Harvest writes in a report from Nordheim smolt nursery in Aure Township, Moere and Romsdal County.

The decision to put down 140,000 smolt was taken Monday, Nov. 27th, after sustained mortality during the weekend in a tub in RASII-department. The new RAS facility was built in 2016.

That’s what came to light in a document SalmonBusiness has been made aware of.

The report makes clear that fish at the RASII enclosure endured gill disease for weeks before the mass deaths arose, without anyone knowing why.

According to Hjetland, a variety of samples have been sent in to the Analysis Center in Trondheim, the Veterinary Institute and Fish Vet Group. Marine Harvest itself is also analyzing samples.

Shortage of space
Marine Harvest had apparently tried to improve the fish’s lot before the incident. Two of four tubs were moved to an outdoor location onsite. Fish moved there were instantly showed signs of improvement.

The two remaining RASII tubs showed no problems until 545 fish died on Friday, Nov. 24th. Marine Harvest decided to move the two remaining tubs from RASII the next day. Due to an on-site space shortage, the last tub wasn’t move out, and the plan was to move it out Monday when some of the outdoor fish were delivered to sea.

“On Sunday 26.11.2017, approx. 5 p.m., a message was sent about increased mortality in the last remaining tub in RASII. The Norwegian Food Safety Agency was informed. On the visit Monday morning, the fish in RASII did not have it good in terms of fish welfare. After an on-the-spot evaluation, it was best for the remaining fish to be euthanized with an overdose of Finquel,” Marine Harvest fish-health biologist, Lisbeth Lovmo Martinsen, said in her accident report.

No connection
Fish were removed to a container via a vacuum pump truck and transported for destruction. By Tuesday, all fish had been removed, and the facility cleaned.

“One hundred fish were dissected during the visit. Outward signs were OK, but individual fish look like they have an extra gill cover. We saw this to some extent in the tub, when fish displayed respiratory difficulty. Inwardly, there was liquid in the breast cavity, but otherwise there was no special dissected find,” the Marine Harvest report continued.

“It’s difficult to ascertain why there was such high mortality. When we see such differences of mortality between RASII and the (outdoor) department with the same fish group as those we saw in the tubs moved out on Saturday. This surely says that some other influencer in the water was the cause,” the Marine Harvest report concluded.

It was the second time this winter that mass death has struck a Marine Harvest in winter. In October, over 700,000 smolt died suddenly at a nursery in Steinsvik, western Norway.

“We see no correlation between this event and the one at Steinsvika earlier this autumn,” Hjetland wrote.

The Nordheim facility produces over 2,000 tonnes a year. A third building extension is underway and will be completed in 2018.