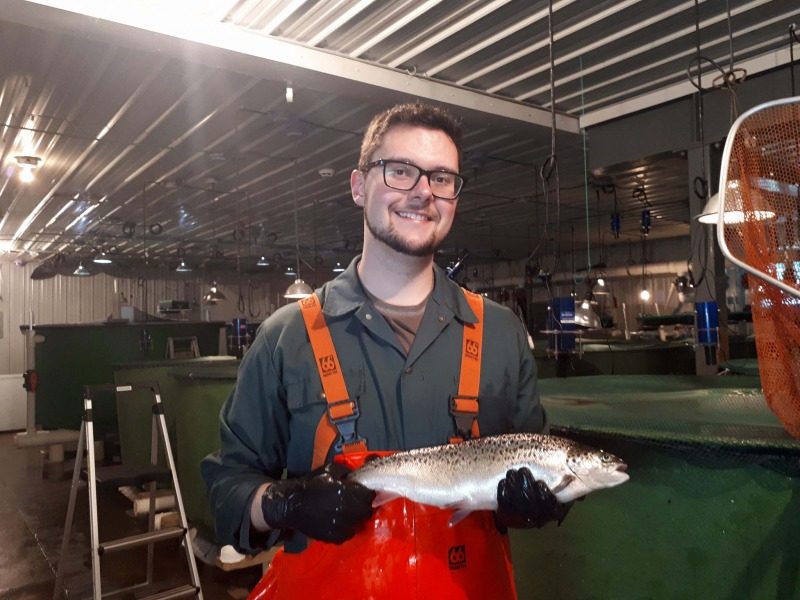 A Canadian graduate student at Newfoundland, Canada’s Memorial University is testing genetically modified salmon to learn how their rapid, designer growth is affected by temperature, Salmon Business has learned.

AquaBounty Canada, a business of AquaBounty Technologies of the U.S., is behind the University fellowship arranged so the researcher can learn how best to grow in a land-based facility the AAS, or AquaAdvantage, salmon that made it onto Canadian dinner plates in 2017.

“The impact of rearing temperature has been well investigated in conventional salmon, however, this has never been studied in AAS,” Eric Ignatz was quoted by University chroniclers as saying.

“We are testing whether they have a different thermal optimum due to the effects of AAS’s rapid growth on their metabolism,” he added.

Ignatz will see what happens to the fish at 10.5 degrees Celsius, 13.5o C and 16.5o C, and he’ll study their amino acids and fatty acids omega-3 and omega-6 for differences. He’ll also look at the effects on AAS fillet colour.

“Not only is it important that they get a product to market in an efficient time frame, but that the product is marketable in that it meets criteria for human consumption,” Ignatz said.

Found out last week that my grant application through #PEIAquacultureTechnology was successful! More gene expression analysis on temperature-dependent growth and immune response in #AquAdvantage salmon coming my way!

The research is in-line with Canadian government support for genetically modified salmon and Euro-American cooperation in the field. The AAS fish was the first genetically modified animal approved as food by the U.S. Food and Drug Administration, and it was engineered at Memorial University while also spending 25 years working its way through the North American approval processes.

So, after purchasing and preparing facilities for a hatchery, nursery, brood and grow-out, AquaBounty Canada has yet to come up with all of AAS-farming’s environmental protocols.

“What are the optimal conditions to raise these salmon in, so they can grow as fast as possible?” Ignatz asked. To do that, he’ll now look at data he’s collected between June 2016 and those first completed fish trials of October 2017.