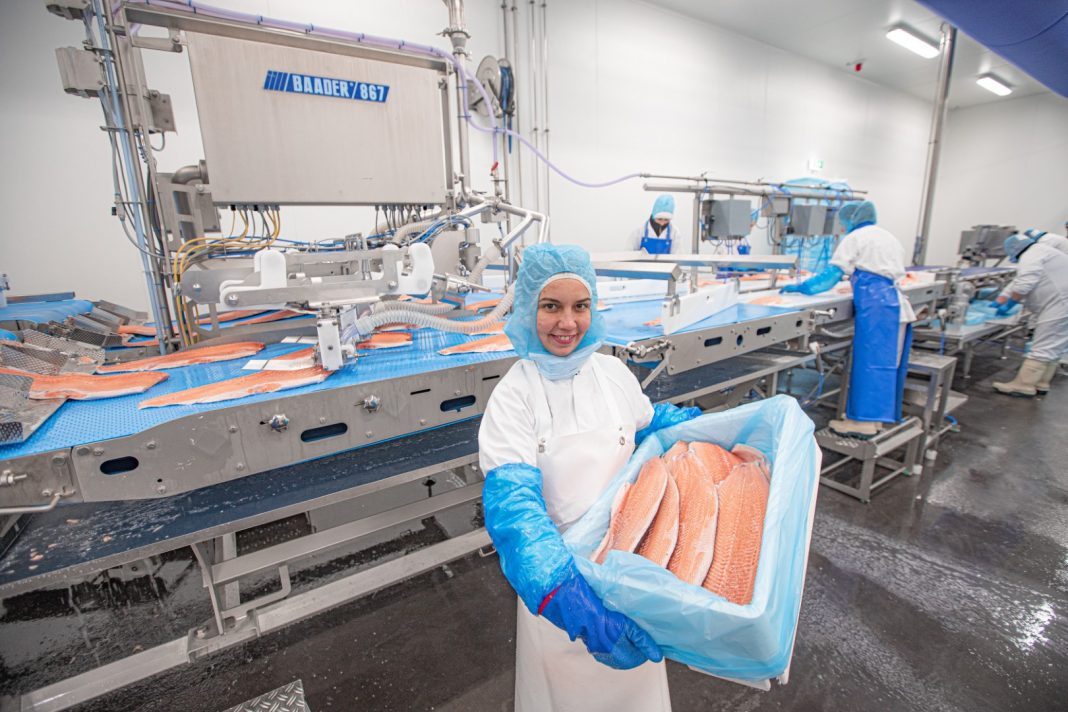 Wholesaler Adri & Zoon, from the Dutch town of Yerseke, has made great strides in recent years: from shellfish company to fish wholesaler, with salmon as its best seller. The company’s cherry on top was the construction of its new building, which opened at the beginning of this year with an extra filleting line for salmon.

“The expansion was badly needed,” says director Adri Bruijnooge. The company headquarters in Yerseke, which dates back to 2002, outgrew its shell, so to speak, due to

the rapidly growing activities in the field of salmon and whitefish. With the extension, the company doubled its production capacity to approximately 12,000 tons per years and expanded the production area by 8,000 square meters.

Due to COVID-19, Adri & Zoon is doing less business. Fortunately, there are many customers who continue to order.

“It’s certainly not easy, but we’re lucky to still be working.”

Norwegian mussels
Adri & Zoon, located in the Dutch province of Zeeland, was founded in 1983 by Adri Bruijnooge senior, the father of the current owner, Adri. Nowadays Adri is also called senior.

That’s because, according to good Zeeland custom, he named his oldest son Adri (junior), too. Son, Adri, and daughter, Marie-Aniek, have been in the business for a number of years now. Second son Pedro also started at the company recently and is now in charge of the newly developed French trading activities.

Initially Adri & Son was a mussel- and shellfish company. Today, the company is a total supplier of fish, crustaceans and shellfish, with the largest volumes being salmon and white fish. Salmon, in particular, is now the best seller at Adri & Zoon.

The sale of salmon started in 1999. An acquaintance of Adri’s from Yerseke went to Norway to work at a mussel farm. Adri Bruijnooge relates: “He told us the mussels were very good in Norway in the period from March to May, when they spawn here in the Netherlands. So we contacted the Norwegian mussel farm, where he worked. I went there with my father to have a look. That turned out to be our first import: mussels, in a tempex box with ice. It was a hit! After that we also took scallops with us from Norway, from another farmer. He advised us: ‘Why don’t you take a little salmon to the Netherlands as well?’ He told us to take a look at salmon farmer Vikenco, in Molde-Aukra. And so we did.”

Adri Bruijnoooge remembers that trip well. “It was 20 degrees below freezing when we drove through the snow to the coast. From there we took the ferry to the island of Hitra. We discovered that the Norwegians were earning 1 to 1.50 Dutch guilders per kilo from their salmon. At that time we earned 50 cents per kilo from mussels… So I called my friend Dennis Simonis in Scheveningen, who owns several fish shops and restaurants. I asked him what the margin in the Netherlands was on large salmon. It turned out to be worth it for us. That’s how it started.”

Adri Bruijnooge was at that time still working for the company as a truck driver. So his wife, Inge, called the customers every Friday and Monday about orders for the salmon. “That’s how it started, very small and inconspicuous. And that’s how we were able to grow.”

“We did that for a number of years. But in the end it turned out not to be that convenient. There was too much at one time and too little the next. Because the production costs in Norway are high, we sometimes incurred considerable losses. That’s when we thought: shouldn’t we start filleting ourselves?”

That’s what happened. In 2010, the company took on a filleter to work for them on a kilo basis.

“In 2013, we decided to set up our own filleting line, next to our business premises, to respond to the growth. At that time our filleting manager worked there with six employees. In addition, we also processed the whitefish in that filleting facility.”

After the manager stopped quite unexpectedly in 2015, and no replacement could be found, Adri Bruijnooge purchased a Baader filleting machine.

“We are still very happy with that purchase to this day. We now have a second one in the new building. Trimming we still do manually .”

Traceability and food safety
Adri & Zoon’s products consist of four segments: salmon, white fish, seafood from the Netherlands and France and delicacies. The main market is the Netherlands, closely followed by Belgium. The company also exports to Germany, France, Luxembourg and Switzerland.

Food safety and traceability are of the utmost importance to the company, explains Bruijnooge.

“Many people nowadays have food allergies. We also supply a lot of care institutions, with vulnerable people. Therefore we absolutely have to guarantee food safety and traceability. Just the idea of  having to deal with an infection, which not only makes

people sick, but shuts down our business and damages our name, is… That’s something we absolutely want to prevent. And fortunately it has never happened. Our Quality Assurance department is essential for the company and has, therefore, two full-timers. We test everything in the laboratory and, of course, also by external agencies,” says Bruijnooge.

Recent developments
On June 1st, 2020, Adri & Zoon took over the trading activities of shipping company Ekofish Group, a forerunner in the field of sustainable twin-rig fishing in the Netherlands.

“This gives us the opportunity to supply our customers with fresh plaice, sole, turbot and brill directly from the ship.”

Salmon, nevertheless, is expected to remain the most important product.

“The demand for salmon among our customers remains high, even now and we don’t expect any changes there in the near future.”