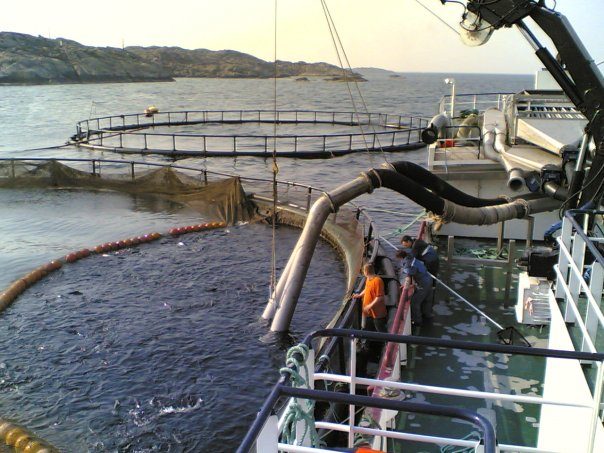 Buyers leaning back while the spot price drops like a knife

“We are not quite settled yet, but it is going down as much as it did a week ago. Maybe more,” a buyer at a European processor told SalmonBusiness.

“Fish is being offered now for a little over five euro delivered-to-market — for the fish that remains. And it is surely a blood-red loss for some exporters.”

The fall in price comes amid the most crucial sales period for salmon. It’s now that smokers buy fish that’ll be smoked and sold for Christmas.

A lot of fish
“My tip is a price of 46 to 49 NOK for farmers. We have a concrete offer on 5.10 euro on three to six euro. That’s fish that’ll be slaughtered today. That reflects a price for farmers of 46 NOK,” the buyer said.

There’s no shortage of salmon this November day.

The price is wreaking havoc with other players, too.

“There’s talk in the market of five euro, 44 to 45 kroner finned and gutted. Then there are others who say 48 to 50. It’s total confusion,” an exporter said. “That it’s been a tough week everyone agrees on.”

“It’s too early to set the firm price. We’re leaning back. The price is in the area of 45 NOK, for now, but we haven’t taken a position,” he submits.

Price pending
Several fish buyers SalmonBusiness has talked about are delaying a decision to buy — in the belief there’ll be another drop in price.

“We haven’t bought fish yet, and it’s taking a little time today. I hear the price is teetering below five euro out in the market. It appears to be getting tough. More fish are coming,” the exporter said.

“40-45 NOK,” he said about the price for farmers. “The price is on the way down. Predicting the bottom isn’t easy. It’s very hard on the big catch. Very hard.”

Others have both bought and sold with a big loss.

“We sold the last truck now at a loss of eight NOK. It was 4-5 kg and 5-6 kg. If people don’t see what’s happening now, then they have blinders on. Everyone has built storage because they thought prices would be 60 NOK forever,” said a frustrated exporter said.

“The price increase this week ruined everything, because that’s when customers started to use freezers. And then came the volume. What we’re struggling with now is finding customers that can take on fish.”