Since the conflict between Russia and Ukraine broke out, countries around the world have imposed a wave of sanctions on Moscow, hitting a variety of sectors and limiting Russian exports.

As countries look for new suppliers to fill the void that has emerged due to restrictions on Russian seafood, Salmon Scotland is planning to step up and work in conjunction with other salmon-producing regions to provide the exports countries that relied on Moscow now need.

An opportunity for Scotland
“I don’t think there’s any doubt that Scotland will be part of that mix of supply that nations who depended on Russia now have to look to,” Tavish Scott, the Chief Executive of Salmon Scotland, told SalmonBusiness. While conceding that Scotland is “not a volume producer compared to some competitors, such as Norway,” Scott hopes that the attraction of Scottish salmon at the “premium end of the market” will bolster international demand.

Scott stated that the Salmon Scotland and Scottish salmon producers “are working very closely with the government’s export and trade departments, such as Scottish development international” to “explore” potential export opportunities that might emerge in the wake of trade restrictions being imposed on Russia.

Russia’s share of the market
Russia exported fish and seafood produce to 62 countries in 2021, totalling more than 2 million tonnes worth over $7 billion, reflecting an increase in the year-on-year value of exports of 33.7%. The previous year, Moscow exported $343 million in whole pacific frozen salmon, making it the third largest exporter of the fish behind Chile and the United States.

Prior to the military conflict in Ukraine, the Russian government had announced plans to nearly double domestic salmon production over the next eight years, encouraging businesses to launch farms in new regions. According to estimates from the Russian Federal Agency for Fisheries, Russian farmers produced 116,000 tonnes of Atlantic salmon and trout in 2020, an increase of 27.5 percent on the previous year.

Atlantic salmon and trout accounted for around 30 percent of Russia’s total aquaculture production in 2020, compared with only 5 percent in 2014. With Russian fishermen catching around 500,000 tonnes of Pacific salmon per year, Moscow has exported the fish to nearby countries, such as China, Japan and South Korea. Russia also transports Pacific salmon across to the European side of the country via railway cars that travel for over 9,000 km, consuming the produce domestically. 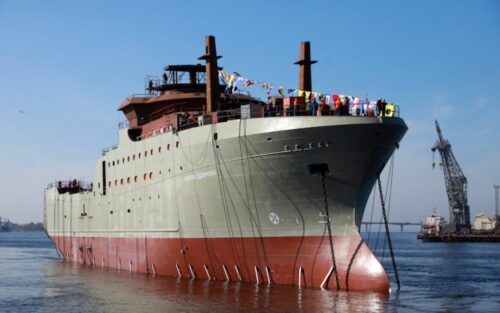 Impact of sanctions
China has not imposed restrictions on Russia over the Ukraine conflict, Japan and South Korea have sanctioned Moscow, hitting the supply of seafood to their countries. Japanese restaurants and fish markets have already reported soaring prices due to the impact of Russian sanctions and limited access to Russian airspace.

Although Scottish salmon is different to the produce exported by Russia, as the Scottish product is high-end farmed fish that commands a higher price than the wild produce distributed by Moscow, Scott hopes the Scotland will be able to use upcoming expos to encourage countries to turn to his region’s salmon to fill the trade gap caused by recently imposed sanctions.

Scotland’s growing salmon industry
Scottish salmon exports have already rebounded, according to data released by the UK government, as the industry returns to pre-Covid and pre-Brexit levels. 2021 saw Scotland’s salmon overseas sales rise to £614 million (€726 million), up 36 percent from 2020 and only marginally below the 2019 level of £618 million (€731 million).

With Scotland currently shipping its produce to 52 different markets, the EU accounts for 61 percent of global Scottish salmon exports, with the US and China following behind.