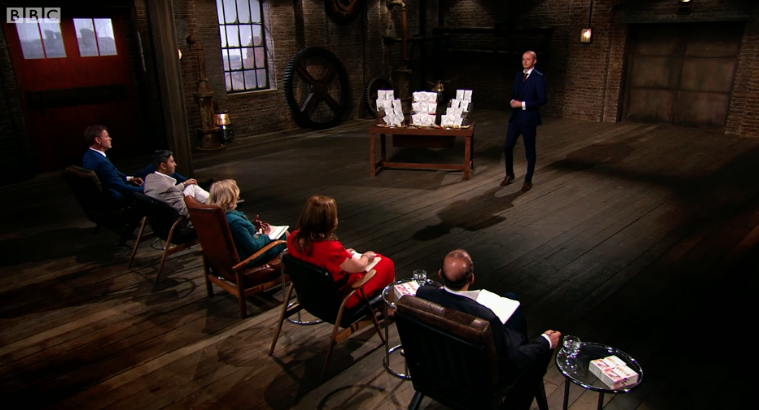 Founder of Sea Chips walked away from a 30K offer from multi-millionaire, Touker Suleyman.

BBC
Faced with the daunting task, co-founder Daniel Pawson presented his brand of salmon skin crisps to the BBC show filmed back in February 2018. Dragons’ Den is a reality television program format in which entrepreneurs pitch their business ideas to a panel of venture capitalists in the hope of securing investment finance from them.

“I’m out”
Dragon Peter Jones said: “Dan, I’m really going cut to the chase. I got really really really excited about the concept – until I tasted the product. And I’m struggling with it” he added. “I love salmon, yet I don’t like this product and that I found surprising,” he said, before saying, “I’m out.”

Fellow Dragon’s Deborah Meaden, Tej Lalvani, and Jenny Campbell all said no to the product. But Touker Suleyman – who has a GBP 150 million fortune – offered Dan GBP 30 thousand offer for 35% of the company.

Convinced that giving away over a third of his company wasn’t the best idea, Pawson walked away from the offer.

But just two months after appearing on the show, Sea Chips sealed an investment from the previous owner of MacKnight Foods Jonathan Brown. The salmon entrepreneur has helped the company to secure a facility factory in Cumbria so that they can meet demand.

In a press release on Monday, the company said that it is now on a path to hitting GBP 1 million revenue within the next 18 months.

Dragon not passionate enough
Daniel Pawson wrote: “Appearing on Dragon’s Den was a great experience and exposure opportunity for us but we really didn’t feel Touker was passionate about or understood Sea Chips enough. We simply couldn’t see how he could benefit us to warrant such a large portion of our company (35%) when we were offering just 10%.

“We were looking for a strategic investor and Jonathan had more relevant experience than all of the Dragons. He also hit the headlines in 2017 when he hired five private jets to help get necessary supplies to the Caribbean island of Dominica, which was ravaged by Hurricane Maria just days before – we knew he was the kind of man we wanted to be in business with.

“Our new factory in Cumbria is a huge step for growth in our business and Jonathan has given us a number of new buyer connections, as well as support with marketing costs. Jonathan has also made the move from Miami to Cumbria to put more focus on the business, for which we are wholly grateful.”

Jonathan Brown added: “When I met Dan and Dom, I was immediately impressed by their passion for something I had spent 35 years to learn and how they had managed to turn salmon skin into something so delicious. I knew I wanted to help them from the off-set and was blown away by the amazing results you can get if you put the time into development.

“I am very proud of them both for their dedication, honest passion and for making a partnership between us happen so seamlessly. We are all very excited about the taking Sea Chips to the next level and I look forward to helping them develop the marketing and export side of the business.”