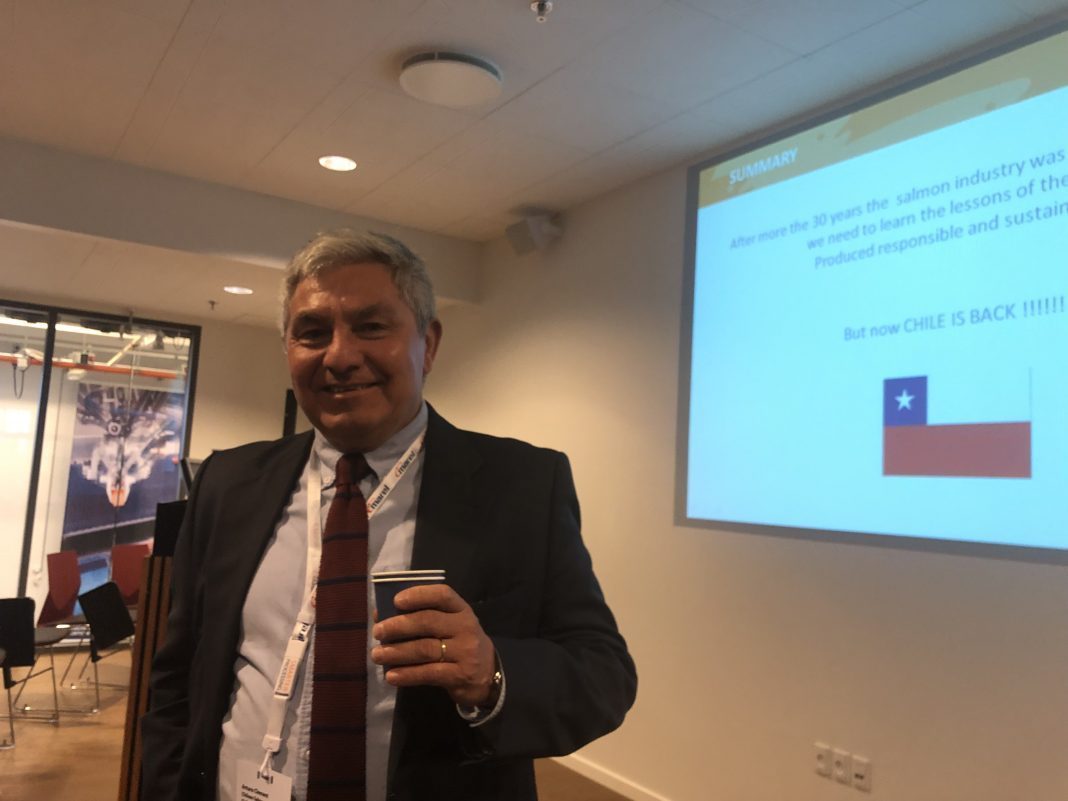 He is the former CEO of Multiexport and current president of SalmonChile. Arturo Clément is one of the pioneers in the Latin American salmon industry.

“We are very focused on processed fish. We only sell a small part of the fish whole,” he said.

Dominance
Having struggled heavily with the aftermath of the ILA shock a decade ago, Chile is now back – with high profitability. Together with Norway, Chile stands behind 80 per cent of the world’s farmed production of salmon.

“We have the best performance ever,” he smiles, adding: “Low feed factor and mortality, as well as high smolt yield. Historically, we have harvested 3-3.5 kilo salmon on average. In the last 18 months, we have had over five kilos in average weight.”

“When it comes to antibiotics, we still use it, since we have problems with SRS. In the past year, we have reduced our use by 23 per cent, but there is still a way to go,” admitted Clément, who has taken the trip across the Atlantic to be at this year’s Marel’s Showhow conference in Copenhagen.

Either way, profitability is high, not least from a historical perspective. And it has affected the stock prices. While Oslo-listed SalmonCamanchaca has doubled in the share price over the past year, other Chilean aquaculture stocks have risen by about 40 per cent.

“Copper is, by far, the biggest margin, our biggest export industry, ahead of fruit. Fish then follows. Salmon is the largest, with a total export value of USD 5.3 billion last year,” he said.

Moderate growth
Clément expects volume growth in the Chilean Atlantic salmon production this year. His estimates are 674,000 tons – up from 649,000 tons in 2018. This means a moderate growth rate of 3.8 per cent.

“It is in line with Norway,” he said, adding: “Chile will grow at that speed for the next five to six years.”

Two countries account for almost half of Chile’s salmon exports. The US is still by far the largest market, with 35 per cent of sales, ahead of Japan with 14 per cent. However, Clément believes another market is at least as exciting in the years to come.

“Last year we grew by 76 per cent. Chile is the largest exporter to China. The market opportunities are fantastic. And the market is big enough for both Norway and Chile. It costs three dollars per kilogram to fly to China, a trip that takes more than 24 hours.”