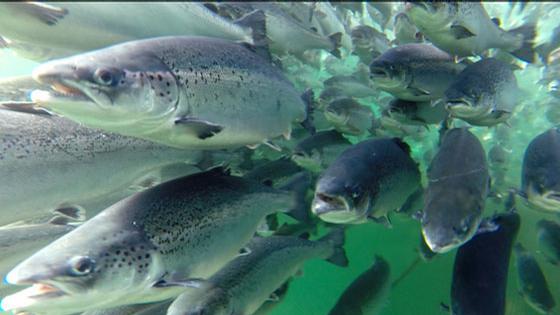 Coastal areas and open-ocean appear to be forming areas, where fish are hard-pressed to “breath”.

Global warming — so-called —  along with pollution of all types is depriving the world’s oceans of oxygen and at alarming rate, say researchers linked to the Smithsonian Environmental Research Center, or SERC.

While the salmon-farming industry is acutely aware of the danger posed by algal blooms, in developing nations and for smaller fish farms unable to relocate, “livelihoods are on the line” when oxygen levels drop due to nutrient load.

“In the Philippines, fish kills in a single town’s aquaculture pens cost more than $10 million,” writes The Smithsonian researchers’ chronicle, Shorelines, about a report saying coastal waterways have seen a “tenfold” increase since 1950 in areas showing “low oxygen”. In the open ocean, “zero-oxygen” areas are reportedly up fourfold “in the past 50 years”.

“The decline in ocean oxygen ranks among the most serious effects of human activities on the Earth’s environment,” wrote marine ecologist, Denise Breitburg, and other international scientists in a paper published in the journal, Science. The researchers, who call themselves the Global Ocean Oxygen Network, have worked since 2016 for the UN’s Intergovernmental Oceanographic Commission and are the first to take a “a sweeping look at the causes, consequences and solutions to low oxygen worldwide”.

Tied to industry
A quick look a map put out by the Network shows the world’s busiest, most industrialized waterways are those suffering most acutely from low-oxygen levels. In the open ocean, it’s the globe’s usual hot spots showing low oxygen levels, especially the doldrums traditionally known for their lack of oxgyn-churning storm activity.

Of interest, the research points to “nutrient pollution” alongside “climate change” as “greatly increasing the number and size of ‘dead zones’” in open ocean and coastal waters. Those dead zones have for years included Maryland’s Chesapeake Bay and The Gulf of Mexico, the Network wrote, adding that there are new problems.

“Even smaller oxygen declines can stunt growth in animals, hinder reproduction and lead to disease or even death. Low oxygen also can trigger the release of dangerous chemicals such as nitrous oxide, a greenhouse gas up to 300-times more powerful than carbon dioxide, and toxic hydrogen sulfide,” they wrote.

Solvable
“This is a problem we can solve,” Breitburg was reported as saying. “Halting climate change requires a global effort, but even local actions can help with nutrient-driven oxygen decline.” Chesapeake Bay, where the Smithsonian is located, has seen a 24 percent drop in oxygen decline due to “better sewage treatment, better farming practices and successful laws like the Clean Air Act”.

SERC, which is three-quarters funded by the U.S. government, says “low-oxygen zones are spreading around the globe”. SalmonBusiness sought the opinion of Norwegian marine chemists and biologists on why the Network’s low-oxygen world map links worrisome areas with busy, industrialized waterways but seems to exclude Norway.