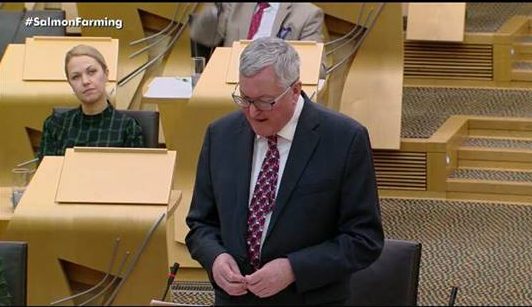 Farmed salmon has become a key part of Scotland’s food and drink success, said Fergus Ewing. However, the overarching argument was that for it to expand, it must tackle its problems.

It was more “show-up” than “showdown” as Holyrood (very politely) debated the findings of the Rural Economy and Connectivity Committee report into salmon farming this Wednesday afternoon.

MSP Edward Mountain said that he understood that the industry wants to expand but until it can prove it is a “good neighbour”, it should not be allowed to do so.

Urgent
He said “urgent and meaningful action needs to be taken” to address regulatory deficiencies. He also said there should be a mandatory and timely approach to the reporting of infestations, with appropriate penalties when they are not and that other country gave weekly sea lice reports. He added that SEPA wasn’t enforcing enough regulation. The Rural Economy and Connectivity Committee convener also had strong words for the yet-unknown person who had leaked information from private sessions to anti-salmon farming campaigners.

SNP MSP Gillian Martin said that salmon is now affordable, helping to grow the economy, and is one of the lowest emission farming methods. However, she agreed that “current regulatory measures are insufficient.”

Decline
Tory MSP Donald Cameron said that while wild salmon and sea trout are in decline and that the reasons for that are complex, “undoubtedly fish farms have had an effect.” He added that more research needs to be done around that.

Fergus Ewing said he felt well prepared after lunch of “prime Scottish salmon” and said: “We need to do more to get it right and that the ‘status quo’ is not an option” but stressed the importance on rural economies. He highlighted that the Scottish government is waiting for the results from John Goodlad’s Salmon Interactions Workstream to provide expert advice on mitigating pressures on wild salmon. A review of the sea lice compliance regime will be completed this Spring, and it is expected to result in the regime being tightened.

Lib Dem MSP Mike Rumbles and Labour MSP Rhoda Grant bemoaned the lack of effective regulation and said that the issue lay with each governing body such as SEPA taking a “silo view” of their responsibility: “There wasn’t anyone body taking an overview of the whole process,” said Rumbles, adding that Marine Scotland should be tasked with this.