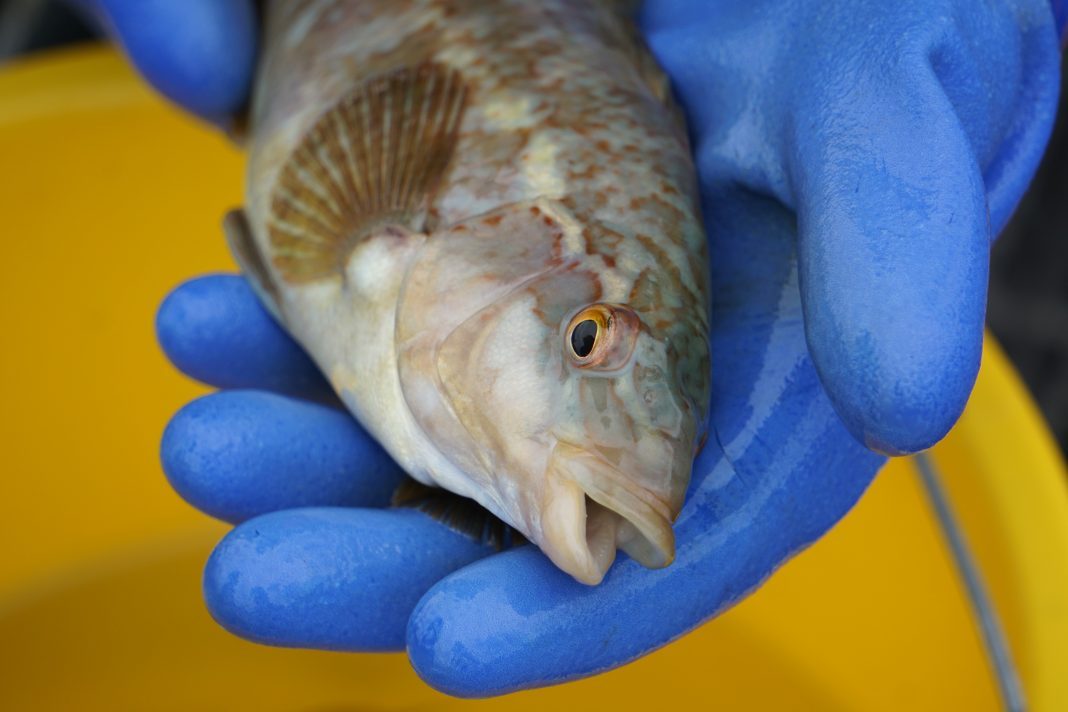 “This first voluntary data publication offers valuable insight into the wrasse fishery and will, year-on-year help build a picture of the fishery”.

In a press release, the SSPO writes that it has published data for the first time on the live capture of Scottish wild wrasse for salmon farms in 2018.

Five species of wrasse are used by the sector as cleaner fish as a natural alternative to chemical treatments. At one point, salmon-farming industry’s demand for live ballan wrasse has made it the most valuable fish in Europe at around £17.50 per fish.

Mowi use farmed wrasse from the Anglesey Aquaculture site in North Wales, which it purchased in 2017.

20 traps
The SSPO – which represents all the main salmon farmers in Scotland – said that the data was collated through the submission of figures from the first 20 traps lifted weekly by Scottish fishing boats providing wrasse to the Scottish salmon farming sector.

“The Scottish salmon farming sector is committed to the sustainable sourcing of cleaner fish stocks. Caught wrasse are an essential element of the sector’s approach to managing sea lice on salmon farms and have been instrumental in the sector’s strategy of “prevention over cure” driving lice levels and medicine use down significantly over past years.

“This first voluntary data publication offers valuable insight into the wrasse fishery and will, year-on-year help build a picture of the fishery. This enhanced transparency demonstrates the seriousness with which the Scottish salmon sector takes its responsibilities as a good marine neighbour and will help build stronger relationships with the important inshore fishers who supply wrasse.

“The sector’s collation and reporting of wrasse data goes beyond what is required by regulators, showing yet again our clear commitment to openness and sustainability.”

GBP 15 million
The salmon farming sector has invested more than GBP 15 million in breeding and husbandry programmes since it adopted cleaner fish as a sea lice control method a decade ago. All lumpfish used for lice control are now farm reared, and the continued investment in new wrasse breeding facilities and programmes should ensure the reliance on wild caught fish will diminish in coming years.

In order to sustain a viable fishery, a voluntary code of conduct is adhered to by all boats supplying the salmon farming sector. This includes a minimum and maximum catch size to ensure juvenile and breeding-age fish are directly returned to their local habitats. Other measures include a closed season for wrasse fishing which extends from 1st December to 1st May.

According to the new figures released by the SSPO, of the 30,564 wrasse recorded as being caught in Scottish waters in 2018, 14,786 were returned as undersized and 1,527 were returned as oversized. Meaning that 53 per cent of wrasse, live caught by Scottish inshore boats, were safely returned to coastal waters.

Wester Ross
Local skipper Mark MacLeod previously crewed deep-water prawn boats, working in the extreme conditions of the open Atlantic Ocean. Fishing for wrasse along the coast of Wester Ross has enabled him to transition to a less dangerous inshore fishery role.

Creel fisherman Mark MacLeod said: “Being a part of Wester Ross team has given me a great opportunity to translate my skills from years of working as a skipper, and my knowledge of the sea, into an effective management of sustainable fishing for wrasse.
“Instead of retiring, I’m still able to enjoy the sea to the fullest and help the industry to move towards a more sustainable future. These are exciting times right now and I’m glad I’m a part of this.”