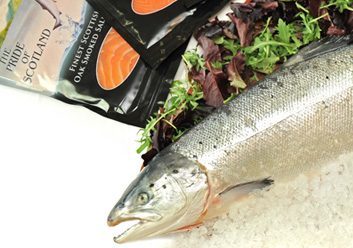 Lossie Seafoods, which sells under the Pride of Scotland brand, has secured £3.2 million in expansion funding.

A Buckie-based business is using the £3.2 million loan from the Royal Bank of Scotland to take advantage of the popularity of one of Scotland’s most prized exports according to Insider.

Lossie Seafoods belongs to the Associated Seafoods group, which specialises in supplying shellfish and smoked salmon & trout to the wholesale and food service markets and it employs around 50 people at its Buckie salmon smoking processing facility and sells to hotels and restaurants.

Talking to the publication, Victor West, managing director of Associated Seafoods, said: “Our goal is to put Scotland and its products onto the map. Lossie Seafoods was founded over 100 years ago, and we still use smoking and curing techniques developed over the generations.

Eileen Tocher, relationship director at Royal Bank of Scotland, added : “The team at Lossie Seafoods supply the highest quality products possible, which is opening up opportunities for the business, both nationally and abroad. The company has expanded at a rapid rate in the last few years, thanks to the team’s ambitious growth plans.”