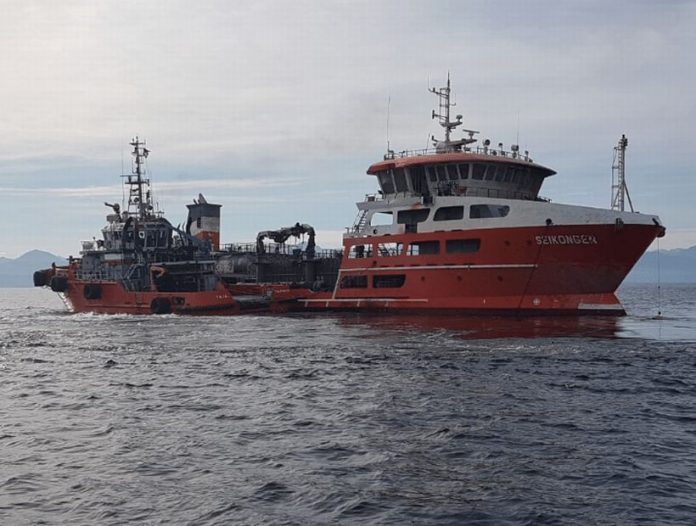 Supported by the Chilean Navy as well as Authorities in Chile, the wellboat “Seikongen” was finally emptied of its rotten cargo last Saturday afternoon.

It confirms maritime authorities in Puerto Montt, according to several Chilean media. It took about a week to remove about 100 tons of salmon, which had dissolved a liquid mass. But according to the reports, everything has gone according to plan.

A long process
The «Seikongen» sunk at the village of Chonchi, just south of Castro on Isla Chiloé in southern Chile last October.

The re-floating of the wellboat was only completed in early August. but there have been problems finding somewhere to dispose of its 200 tonnes of toxic cargo. The plan was for it to be towed  north to Talcahuano for emptying and repair, but the municipality has refused to receive it.

The city’s mayor feared that the rotten salmon would pose a health risk to the population. The boat was subsequently denied calls to several other ports.

The boat has recently been outside Puerto Montt pending a solution.

Disinfected
Governor of Los Lagos, Harry Jürgensen, confirmed to SoyChile that the ship’s waste will transported to a plant owned by Fiordo Austral.

The waste will then be dumped before being approved by the Chilean Ministry of Health, and expelled to a landfill in Osorno municipality in the Los Lagos region.

The “Seikongen” must now be disinfected. Then the wellboat will be towed to a port, but it’s not yet been decided where exactly yet.

The owner of the wellboat, Empresas Maritimas of Chile, announced to BioBioChile on Sunday that they will repair the boat and put it back into operation.