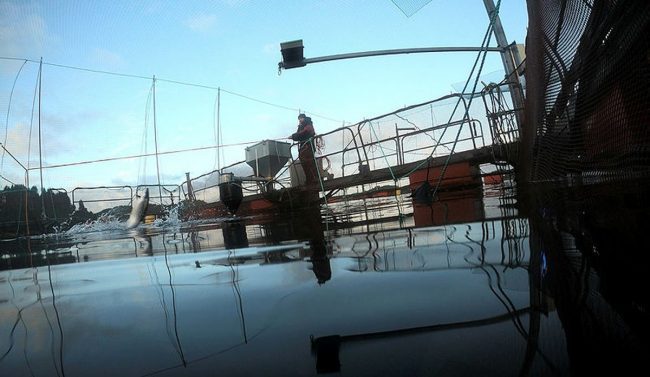 None are sure just how many of those feed pellets are merely used as footballs by swimming salmon, but researchers at the Norwegian Havforskningsinstituttet say they have a good idea.

“In tonnes and expense it’s large amounts,” said Ole Folkedal, a research head taking aim at feed wasted by already satiated fish. Feed waste settling on the seabed is a key consideration in the environmental planning of grow-out arrays and one reason cages are fallowed.

No frenzy, just play
The goal is to use the echo sounder to trigger a stop to feeding once fish cease normal meal gatherings and begin to disperse and “play”. The echo sounder also reveals when they’re no longer nearer the surface to feed.

“Feed control is done manually today, with the help of underwater cameras,” Folkedal said, adding, “By using this echo sounder method we can robotise feed controls.”

Commercial trials
In a scale feed operation, researchers in the summer of 2017 managed to completely automate feed for a month.

“We managed that without throwing away a single pellet and with good growth on the fish,” he said, saying that commercial-scale trials have begun.