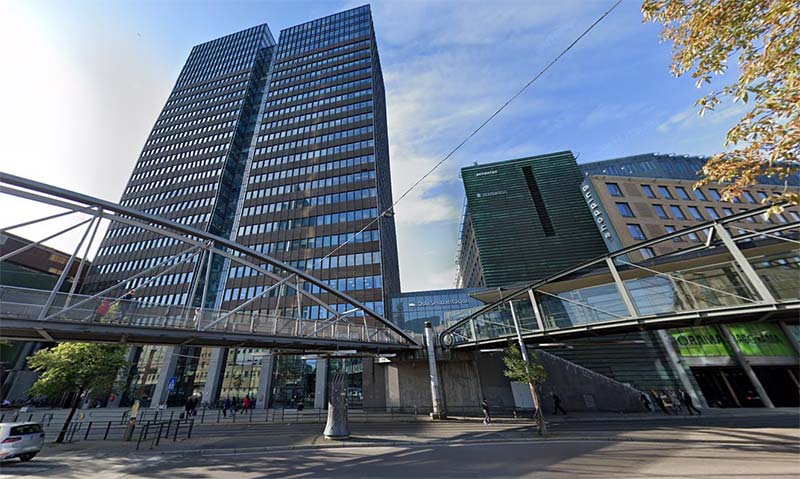 Big money at stake when camera company Sealab was swallowed up.

Bluegrove’s homepage is not characterised by modesty. “Bluegrove headquarters” it says, showing a skyscraper in Oslo, Norway. If one had not known better, one might think that the twin tower, formerly known as the Postgiro Building, was actually the headquarters of Bluegrove. But the activity of the company, formerly fronted as CageEye, doesn’t exactly fill up two 26-story tower blocks.

At the last financial statement, for 2018, CageEye had a turnover of EUR 0.4 million. Bluegrove has since then, acquired NorseAqua and recently also Sealab respectively. The accounts for 2019 are not yet known.

International investors
The ambitious Oslo firm CageEye and its newly established holding company Bluegrove are led by 30-year-old Bendik Sørensen Søvegjarto. He and his colleague Joakim Myrland are the largest owners in CageEye, with 24.9 per cent each of the shares, according to Proff.no. With them on the team, they have two international investors, Dutch Aqua-Spark and London-based Breed Reply Investments, with a total of 26.7 per cent ownership. In 2018, presumably from these two, EUR 4 million in new equity was raised in CageEye.

These are funds that are now used to build a position within the Norwegian aquaculture industry. One Trondheim-based entrepreneur has felt this.

“I started Sealab in 2015, really without a business plan, together with my eldest son, Oscar,” Milan Markovic told SalmonBusiness. “We were passionate about technology and ocean space and realised there could be a use for completely innovative underwater cameras for AI (artificial intelligence) and machine vision.”

“We started with two empty hands, did not have access to capital. We both have basic education in electrical,” Markovic said, before turning off a VHF that scours in the background. He’s made the trip to the ocean that day.

24/7
The work load of building the start-up company Sealab was hectic. They got a nudge at Marine Harvest (now Mowi), which was be their first pilot customer.

“We work around the clock, achieve results, and there were rumours starting to go out in Trondheim (Central Norway). We were contacted by Professor Anette Stahl at NTNU, and welcomed four cybernetics master students. The four students changed our lives. The company was taken from just two inventors to a completely different level. We got some capital and kept our heads above the water. Then we, father and son, went to Lovund (island in Northern Norway), rented a small cottage, brewed coffee in the mornings and made a business plan in a week. It confirmed substance, hit the market and investors,” he said, engagedly.

“We are working on an infinite number of innovations. Including an award-winning project with biometric recognition of salmon. We patented the technology, a solution where one can distinguish every salmon from each other through machine vision. One can log health status at the individual level, provide lower environmental footprint, more efficient feeding and provide increased earnings for the salmon farmers,” he said.

Fetching money
“Then we meet Morten Sjoner Syrstad. That was in 2018. Then this took it a whole new level. Then we were to bring in capital, tens of millions. That was just over NOK 40 million (EUR 3.7 million). He found us, we didn’t find him. Focus Corporate is the company called. They’re raising money and they’re restructuring,” he added.

This wasn’t a big company. Focus Corporate had a turnover of EUR 0.2 million in 2018.

“He brought in investors. We only met one of them. In retrospect, we do not see that, and I would hereby warn entrepreneurs – be critical of the choice of investors,” said Markovic. “After capital raising, we relied on building management fast. We were impressed by Syrstad, who made a budget and big plans. He took on a leadership role and became CEO,” explained the founder.

The Markovic family remains the largest shareholder, with 41 per-cent of shares in Sealab. The second-largest shareholder is the investment company Haspro (13.2 per-cent), owned by salmon farmer Halle Sivertsen and his family. The third-largest is technology investor Hans Michael Hansen’s HMH (11 per-cent) and FCMI (11 per-cent). FCMI has the same office address as Focus Corporate. Sjoner Syrstad is also a board member, and owns 33 per-cent of the shares, in both FCMI and Focus Corporate.

“We had a flying start. The company is getting its first orders. However, there are challenges with software with the first customers. This is creating a lot of extra activity,” Markovic said.

Microsoft
Then, the following year, an exciting inquiry took place.

“In November 2019, we were invited to Microsoft, to its headquarters in Redmond, Seattle,” said Markovic. “Microsoft is not part of the process we are now experiencing, I want to emphasise that.”

“In Seattle, it was busy. We had many meetings with Microsoft. We were met by Sjoner Syrstad, on the day of departure, with a very unique business opportunity for Sealab, we were told. At a breakfast meeting, we meet Petter Kleppan who represented CageEye.

He said that the meeting was weird he he added that they would “eventually understand what’s going on after 30 minutes.”

“Are you talking about buying Sealab?” Markovic asked.

“But Sealab is not for sale,” said Markovic.

“A sketch was presented, but I did not see it as an offer in Seattle,” said Morten Sjoner Syrstad.

“The total valuation is too low. Sealab is about to be much more worth than that,” Markovic countered.

“That’s what we can offer,” Kleppan said. He did this without asking for financial information from Sealab.

EUR 190 million
In the proposed transaction, CageEye was valued, on a 100 per cent basis, at NOK 2 billion (EUR 190 million). The valuation of the Oslo company was resilient, given an annual turnover of EUR 0.4 million and a pre-tax profit of EUR -0.8 million in 2018.

“We thought it was an ambush and we were confused. It was clear that CageEye had no relevant technology that was interesting to us and we did not understand the business idea of the company,” Markovic continued. “Sjoner Syrstad, as CEO, had gone behind our backs. I give a clear message to Sjoner Syrstad: “You will not pursue this.”

Soon came the formal offer, of EUR 22 million for 100 per-cent of Sealab from CageEye. “The offer for that valuation, as far as I remember, was submitted to Sealab Ocean Group at the end of February,” said Sjoner Syrstad, who advised shareholders to sell, knowing of a squeezed liquidity in the start-up company.

“No, we have free funds. It’s going to be tight, yes, but we’re also going to raise capital,” Markovic replied.

“On February 28, Sealab Ocean Group received an offer that was turned down. The company then needed liquidity, did a job to attract new investors, but the valuation offered by CageEye was not matched. And then the coronavirus came into play,” said Sjoner Syrstad.

“On April 22, the General Meeting, led by Markovic, declined the offer from CageEye, on the basis that there were other stakeholders offering more, which later turned out not to be correct. The offer, of EUR 22 million, was submitted to the Board of Directors and later the general meeting on 22 April and voted down, as there was another player who could pay a better price,” according to Markovic.

“And it never happened. It was a process of raising equity that was unsuccessful. Slottvarden (holding company owned by the Markovic family .ed) pointed to some investors, who turned out not to have an interest,” he continues.

“One tried to find other sources of capital. Players outside the industry, but also financial investors, but none matched this offer from CageEye or had an interest in adding the necessary capital,” said Sjoner Syrstad.

“The details of the transaction, valuation and exchange conditions are something you need to talk to the board about. The Board of Directors has entered into an agreement for sale here. What I know is the processes of CageEye this winter, until April, and that’s where the offer came out,” he added.

Pressure
“We had the board against us, the largest shareholders were against us. We are threatened, pressured and harassed since we blocked a fantastic opportunity. The board stopped focusing on raising more capital. Five attempts were made from Syrstad during the winter. We stopped all of them. On the sixth attempt, he succeeded,” Markovic said.

“We, Oscar and I, began to doubt for the first time. We gave in and let ourselves be pressured to sell,” he said.

The second-largest shareholder in Sealab is the investment company Haspro. The CEO of Haspro, Solvår Hallesdatter Hardesty, refers to her father, Halle Sivertsen, for comment on the matter. Halle Sivertsen has not returned repeated requests from SalmonBusiness.

After an extraordinary general meeting, Sjoner Syrstad resigned from his job as CEO. Markovic, the largest owner with 41 per-cent of the shares, was also replaced as chairman.

“I’m being kicked out as chairman. In comes lawyer Ståle Spjøtvoll as the new chairman,” said Markovic.

Negotiations with CageEye continued. But the settlement will not be in cash.

“We will be settled in 18 months through a seller’s credit. But now it’s starting to come up with a lot of warning lights,” Markovic said.

Insolvency
Then the axe fell.

“We were told on a Friday: “Pack your stuff, on Monday you’re going to be out,” he said. “Sealab struggled with cash, due to a large inventory. 30 systems were supposed to be going out to customers. The board is provoking insolvency on July 1,” Markovic claimed.

“Suddenly, the two subsidiaries have been given away to CageEye. CageEye hasn’t paid a penny for this. During August they were transferred to CageEye. They have taken over inventories, technology and employees. We who started it all sit back, without jobs, without anything,” Markovic claimed.

“But I’m really glad you’re calling because I’m concerned about how this is portrayed. I’m responding to allegations from Markovic that they’re robbed of the company. That he threatens and calls it betrayal or fraud. It’s as far over the line and under the belt as it can get,” he said.

“The only people who have sold shares here are Slottvarden, the company of Markovic, when they took in shareholders in the company. It’s shouting out loud, but it may not be true because of that. I want to clarify this,” said Sjoner Syrstad.

At the end of August, Bluegrove announced the acquisition of Sealab. But now, in the 11th hour, new negotiations are taking place between Sealab Ocean Group’s shareholders. Even if the shares have been transferred, the final valuation has not been clarified.

Negotiations
In connection with CageEye’s initial acquisition attempt at Sealab, the former was priced at EUR 190 million. Bluegrove/CageEye would not elaborate on how they estimated this company’s value.

“There are now ongoing negotiations between the shareholders of Sealab Ocean Group, so at this time we cannot comment on this. We can, of course, comment on this at a later date, when the agreement has been closed,” Marloes Eshuis, communications manager for CageEye/Bluegrove,” told SalmonBusiness.

But the valuation that exists is publicly known?

“Yes, but the valuation has been prepared by third parties. That’s how these negotiations take place,” he said.

Who is this third party that has set a price of EUR 190 million for a company with EUR 0.4 million in turnover?

“I don’t want to talk about it now,” she said. “Negotiations are now ongoing. This case will be more balanced if you can wait to mention it until the negotiations are over.

CageEye also does not wish to comment on the valuation of Sealab or a 1:9 exchange ratio compared between Sealab and CageEye. In 2018, Sealab had a turnover of EUR 0.6 million and a pre-tax profit of EUR -0.4 million.