Sales boosted by traditional sales of cages and feed rafts, but land-based facilities are taking up increasing amounts of space in the order book.

Restrictions
“The profitability in Q4 is negatively impacted by supply chain restrictions and cost inflations,” wrote AKVA group in its quarterly report which will be presented on Friday morning.

The company promises NOK 1 (€0.10) per share in dividends, which will be paid during the first quarter of 2022. 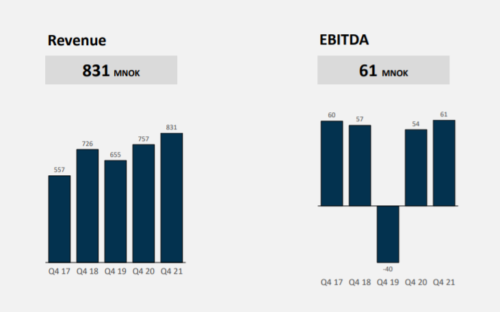 “AKVA group have maintained a strong focus on the measures implemented after the COVID-19 outbreak in March 2020 to ensure the health and safety of our employees and customers, to monitor and optimize the overall liquidity in the company, to maintain the security of supply during the crisis and a steady order intake to ensure work for all in AKVA group. The COVID-19 restrictions had negative impact on the operations during the first half year of 2021. The negative implications were mainly related to travel restrictions and use of foreign workforce in ongoing operations. The travel restrictions were lifted at the end of Q2 2021 and the impact from the restrictions were limited in Q3 and Q4.” the report continued.

On land
While sales and earnings are dominated by cage-based technology for aquaculture at sea, especially in Northern Europe, the order book has an increasing number of contracts for work on land-based fish farms. 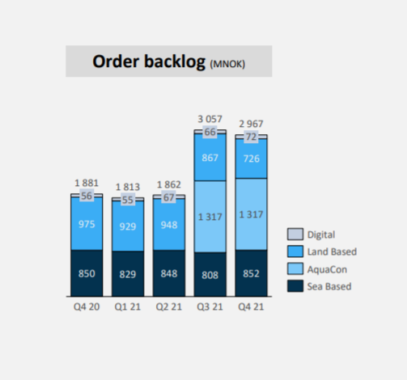 One of these orders, NOK 1.3 billion (€130 million) for AquaCon, is conditional on financing. Last autumn, the Norwegian start-up company AquaCon signed a contract with AKVA group and the latter’s new business partner Israel Corp. to build a land-based facility that can produce 16,000 tons of salmon in Maryland on the U.S. East Coast. The price tag is $150 million.