The use of lochs to hold smolt is unique to Mowi’s Scottish operations.

On a clear day, you can see Scotland’s highest mountain, Ben Nevis, looming magnificently above Mowi’s site at Loch Lochy. Today, however, like 181 days every year in nearby Fort William – Britain’s wettest town – it is raining.

The fish won’t mind though.

We are here to watch 10,000 fish being transferred via lorry from the company’s Inchmore hatchery some 40 miles, and an hour’s drive north.

Despite Mowi’s Norwegian origins, the company’s Scottish operation has a number of distinctive features. Most notable perhaps is the use of Scotland’s fresh water lochs, where fish are moved to from the hatcheries before being transferred out to sea.

At more than 230 ft deep, Loch Lochy is the third-deepest lake in Scotland. There are a number of legends about the strange inhabitants lurking beneath the lake’s still black waters – kelpies, sea serpents, shapeshifters. Joining them are salmon, millions of them. According to site manager Sandy MacKinnon, a significant percentage of the smolt produced by Mowi in Scotland each year, come to Loch Lochy.

There are 36 cages in total at the site, divided into three groups. We watch as one cage is detached from its moorings and brought in to the end of the small jetty by the Mowi branded buildings at the side of the lake.

Low stress environment
Two tanks on the back of a lorry parked at the quayside are emptied via huge hoses into the pen at the end of the jetty. MacKinnon explains that to avoid stress, the fish are not pumped and the water is allowed to flow out of the tanks naturally. Clear sections in the hose allow us to see the fish drifting in batches into the cage. Once the fish have finished transferring, the pen is manoeuvred back out into the middle of the Loch. 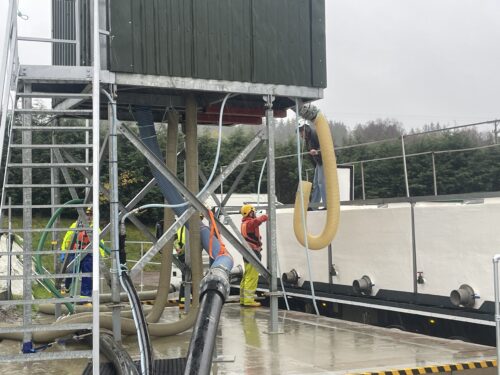 Mackinnon says the batch being transferred to the loch will go straight onto 24 hour light now, and will be ready to go out to see come January next year.

“When we want them to go to sea, it takes around 450 degree days of light. So we’ll put on 24 hour lights in the cages, and they’ll be ready to go to sea for a set date, give or take a week. So we can effectively batch them year round.”

“The fish are very low stocked. We generally have salmon going out here at around five kilos per cubic metre. They’re very well looked after and it’s a much more natural environment than elsewhere.”

Scottish advantage
MacKinnon says that in the tower next to where the container lorry is parked, is a scanner that images every single fish as they pass through the hoses, allowing each fish to be tracked for accountability purposes. “We count them all in and out so we can show transparency in the numbers and that there have been no escapes. Its quite a slick operation.”

When fish are removed for transfer to the sea, the process is reversed and they are transported by lorry back out and away for the final stage in their journey.

MacKinnon explains, “the advantage we have is the lochs. We have more space for the fish to acclimatise from a sterile recirculation hatchery. And they get used to weather, the natural light and darkness. They can get used to the way they’re getting fed, they get used to swimming around in cages.”

Loch system
“When we put fish to sea and we are benchmarked against the hatchery, you can see quite a visible difference. When the fish just go straight in from the hatchery and into the sea cages they sit quite deep, they take a week or so to acclimatise to everything that’s going on. But with our fish they are literally out the boat, and they’re ready to go, they’re on feed and the shoaling, they’re happy. So there is an advantage to what we’re doing here as well.”

His point is illustrated by the lively fish in front of us, which can be seen breaking the surface of the water as they jump.

“Our capacity, compared to Norway, is a lot smaller, so we need loch capacity to hold the biomass prior to going to sea as well.”

Asked about the advantages of the loch system, Mackinnon says, “you can see better fish health, you can see a reduction in mortality through the loch to sea versus direct transfer. And performance and growth is far better from loch than hatchery as well. The fish are more ready for it, acclimatised, and the don’t take as big a knock. There’s no harm done to the fish going direct from hatchery to sea but it’s just showing as better. And that’s why we are batching so many fish through here.”

Climate changeWith COP26 underway in Glasgow just a few hours south, climate change is on everyone’s mind. MacKinnon says that the lake level dropped so much at points last year that the company is considering lengthening the pier to make sure they can get the pens in for transfers.

“Recently, we’ve seen 20 and a half degrees centigrade here. If you go back 10 years ago you were lucky if you see 18. We were over 19.5 for three weeks. Never heard of it before and we record the temperature here 24 hours a day, seven days a week.”

Do the fish struggle to put on weight in these warmer conditions?

“At 20 degrees, they’ll go off their food just a wee touch. They’ll still convert quite quickly. We found exceptional growth this year. But there was a few days when we were up near the 20 degrees mark where they were just off their appetite a wee touch.”