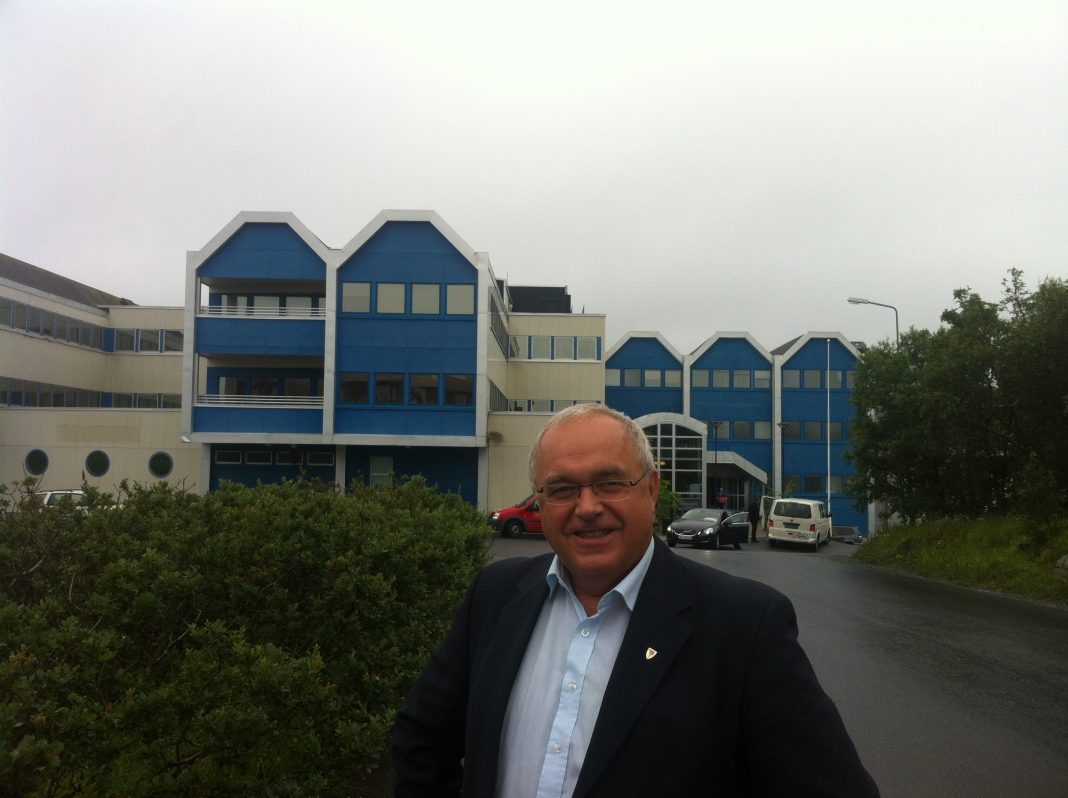 The Architect: Paul Birger Torgnes was the driving force and the man who built up Fjord Seafood from being a company with two production licenses to becoming the world’s third largest marine farming company. Photo: Aslak Berge

The rise and fall – and rise again – of Fjord Seafood.

The head office has a huge, impressive mirrored glass facade. Behind this is a building that houses the old post office and corner store at Toft, just outside Bronnoysund, Northern Norway. Founder Paul Birger Torgnes’ shiny Audi A8 is parked in the courtyard.

Fjord Seafood was established in 1996, based on Torgnes Invest’s two fish production licenses. It hadn’t been more than five years since the then fisheries minister Oddrun Pettersen (Labour Party) had done away with the principle “one man, one production license”. A wave of consolidation swept in over “fish-farming Norway”.

The company was the result of merging a number of production licenses on Helgeland and Nord-Trondelag. The hub of the operation was the big slaughter plant on Heroy, a short ferry trip north of Sandnessjoen.

Network
Charismatic Torgnes, with a network that very few others in the Norwegian marine farming industry could claim to have, had travelled the length and breadth of Norway together with his CFO Sigurd Pettersen, headhunted from Fokus Bank. He was on an acquisition mission, offering payment in cash, or preferably in shares.

Similar to competitor Pan Fish the company’s rapidly rising shares were worth more than cash. The two salmon comets left no room for doubt that it was possible to become rich on farmed salmon. Fjord Seafood surfed on escalating salmon prices, powering along like a cannonball express in the grey market.

The year 2000 saw a giant leap made. Fjord Seafood was merged together with Domstein’s 25 production licenses in Western Norway. With settlement in shares, stock exchange listed Domstein becomes the principal shareholder with 40 percent of the shares. Norway’s undisputed seafood sovereign, Rolf Domstein, is appointed chairman of the company.

September the same year Fjord Seafood went public, and raised €74m in fresh capital. That marked the start of the hunt beyond the frontiers of Norway. Acquisitions are implemented by Fjord Seafood in rapid succession of the following; Fjord Seafood Tecmar (snatched right in front of Pan Fish’s nose) and SalmoAmerica in Chile, a bunch of production licenses in Scotland, and the Belgian processing company Pieters and American ContiSea.

The last mentioned purchase, a salmon production company in Maine, operated by the young Norwegian Alf-Helge Aarskog (later to become Marine Harvest CEO), meant two new and resolute shareholders came on board, Seaboard Corp. and ContiGroup. The latter is one of the United States’ biggest chicken producers.

Salmon bonanza
“Hi everyone, and welcome to the quarterly presentation for Fjord Seafood. My name is still Paul Birger Torgnes,” said the Fjord Seafood boss, and is greeted with acknowledging nods from the finance elite gathered at Shippingklubben in Oslo.

In short, it’s a salmon bonanza. Rapid growth is like sweet music to the ears of the investors. Fjord Seafood is making an impact on the stock exchange. Salmon prices rise to 4 euros in the summer of 2000.

The aquaculture industry enters into its worst ever and longest lasting crisis.

Desperate times call for desperate measures. Torgnes and Domstein start merger talks with State-dominated Cermaq. In June 2002 the shareholders are summoned to an extraordinary general meeting in the VG basement in Akersgata (Oslo). On the agenda: Merger.

The proposition needed a two-thirds majority.

“This is bad handling, to put it bluntly,” thundered founder Steinar Furu, while rolling up his shirt sleeves, exposing tattoos.

“We have a majority together with the Americans,” he added.

Rescue plank
“The proposal has failed,” a despondent chairman Rolf Domstein concluded afterwards. The merger was voted down by the slimmest margin of votes. The rescue plank had been removed by disillusioned minor shareholders and local politicians from Helgeland, together with the capitalists from U.S. East Coast.

While Pan Fish goes to the wall and is taken over by the banks, Fjord Seafood soldiers on. The losses are borne by the shareholders. Share issues water down the existing shareholders. Domstein now has only 22 percent of the share. Torgnes steps down.

Into the arena arrives a shrewd fox – Helge Midttun, with corporate experience from several public companies and position as chairman in consumer company Rieber & Son. Midttun launches a strategy that aims at Fjord becoming an integrated seafood producer, not exclusively a salmon producer. Short term however, the main concern is on cutting costs and focusing on the nucleus of the enterprise.

No help can be found on the salmon market. Things go from bad to worse. In 2003 prices average just over 2 euro/kg. Fjord Seafood’s share price drops to NOK 2.

Cool storage
The situation is critical. The market is flooded with salmon. Supply needs to be tightened up. Summer 2003; the seven largest Norwegian producers, including Fjord Seafood, agree on refrigerated storage of 30,000 tonnes of salmon.

“We need an immediate initiative that ensures the industry avoids a landslide of bankruptcies,” said Follalaks owner Tarald Sivertsen during Aqua Nor in Trondheim. “To you critics, those of you who were negative to the proposal,” warned Sivertsen: “Anarchy will be the outcome. Never mind, we’ll just have to turn the lights back on in spring and see who’s left in this industry”.

He is supported by Norwegian Seafood Federation salmon diplomat Per Dag Iversen: “A price collapse will result in a new dumping issue. It’s only a matter of time before a new investigation arrives from the EU. Anyone who thinks otherwise is naive. Punitive duties are waiting in the wings. If we don’t act, others will act for us”.

The threat of refrigeration bears fruit. From Midsummer’s Eve to September 1 salmon prices rocket by 40 percent. Cool storage plans are put on ice.

During the Salmon Days conference in January 2004, EWOS CEO Kjell Bjordal takes the podium and declares there is only five percent equity left in the industry. The rest is lost. The Norwegian aquaculture industry is up to its eyes in debt and incurring losses. The capital drought in the industry involves reducing releases of smolts. Not just in Norway. Growth in global supply is declining – to a level way below the underlying market growth.

Demand for salmon is robust. Nothing compares to the enticement of low prices for building markets.

After a zero result for producers in 2004, the shortage in supply is having an effect in 2005. Salmon prices pas 2.65 euro. Profitability is back.

The Predator
The new Pan Fish boss Atle Eide contacts Midttun to negotiate a merger between the two public companies. Bank-owned Pan Fish wants to consolidate the industry. Talks go nowhere. Midttun maintains that Fjord will not operate solely in salmon production, but also other species.

“We’ve had some knockbacks in production due to bad weather and disease. In 2005 we will be harvesting 81,000 tonnes of salmon, live weight,” he said.

“If you aim at everything, you will hit nothing,” responds a scathing Eide.

The pursuit of Fjord Seafood has now ramped up several notches.

Already at the end of June Pan Fish buys 25 percent of Fjord Seafood for around €75 million. Domstein sells himself out for NOK 5 per share. Fredriksen is in the driver’s seat and its principal shareholder. Spring 2006 Fredriksen has control over 57.7 percent of the shares in Fjord Seafood. Later he puts in a bid for the remainder of the company.

In the same period Pan Fish acquires, with the help of John Fredriksen’s cheque book, Marine Harvest from Dutch feed company Nutreco. Now Pan Fish, Fjord Seafood and Marine Harvest (that took over Norwegian Stolt Sea Farm the previous year) are merged as one company. The giant, which ousted Pan Fish from its position on Oslo Stock Exchange, has production capacity of 400,000 tonnes salmon, and thus indisputably and by far the world’s largest aquaculture company.

January 2018. Marine Harvest’s market cap is €8 billion, one-quarter of which stems from the enterprise that was founded at Toft. The volumes of fish produced in Helgeland, from the Heroy hub, are amongst the most profit-earning in the multinational conglomerate.