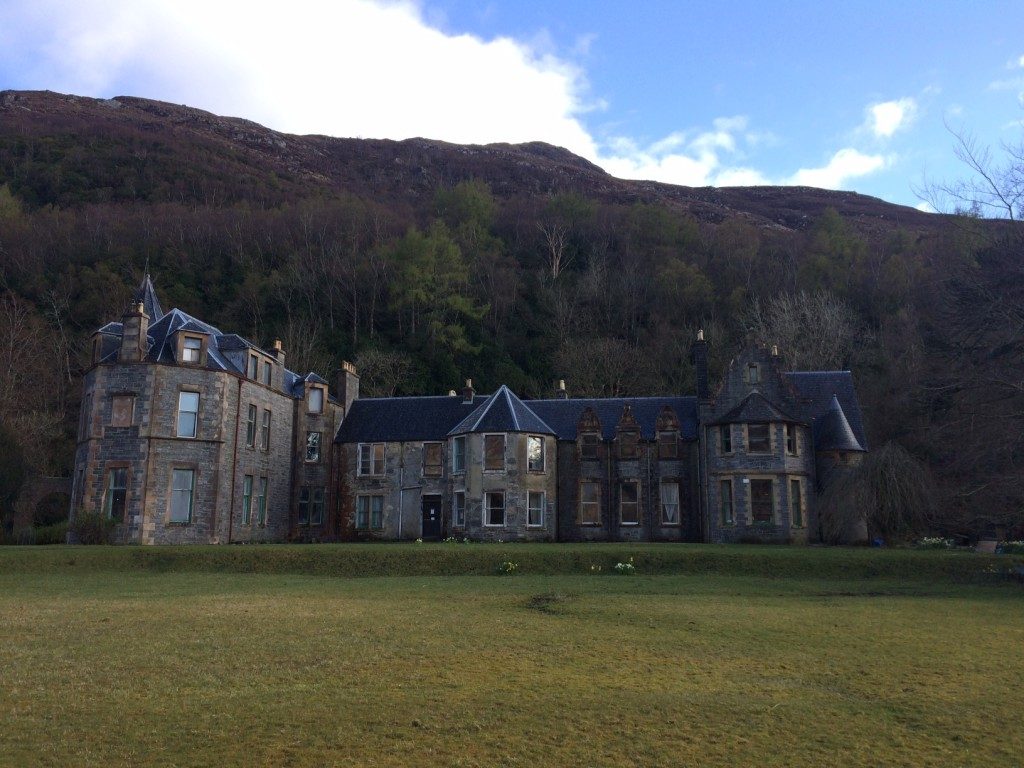 The terrace and benches by the office window are made from recycled plastic farm cages. A few hundred yards away, a fish farm’s cages are bobbing gently with the tide in the fjord.

“Ardnish is the name of this place,” David Corrigan tells Salmon Business. “This was where the first salmon farm in the United Kingdom was established. The first salmon were produced in 1971, in total 14 metric tons.”

Corrigan is FTU Manager at the Marine Harvest facility. He has worked here since 1985, and knows its history better than most.

“Our annual production totals 300 metric tons. It is a research facility with cages measuring 5×5 metres, and in fact the only research site of its kind in Scotland.

Unilever
The site for the fish farm lay in the innermost reaches of the narrow Loch Ailort. On the marshes beyond the shoreline and close by the salmon river, Ailort River, the consumer goods giant Unilever began researching fish farming already in 1958. First on trout, later on salmon. The Unilever Research Laboratory set up a research station on the school site in Lochailort, based on the technology of marine farming pioneers Karstein O. and Olav C. Vik of Sykkylven, Western Norway.

In 1964 the Vik brothers inked an agreement with Unilever to build a facility according to their design, of which they received payment totalling GBP 20,000.

“The agreement with Unilever was essentially a mutual agreement; they gained knowledge from us, and we from them. However, Unilever then employed ten biologists and set up high fences around its facility. So after that we no longer had insight there. But, we had capital and that’s what enabled us to survive. We built an adaptation system for the small fish, pump stations and a cold storage plant,” Karstein Vik had previously said in an interview with author Erna Osland.

Unilever’s new aquaculture enterprise, which was established in 1965, was given the name Marine Harvest.

“It’s an iconic name. I think it would be difficult to change,” Corrigan said.

Commandos
Several hundred yards away from Ardnish is Inverailort Castle. The old manor has been abandoned, and now has more of the appearance of a ghost house.

“An old lady lived there for many years. She had a hundred hens, six dogs, 12 cats and goodness knows how many birds there. Her name was Barbara. At that time there was also a post office in there,” said Corrigan.

Before that time Inverailort Castle was for a long while at the disposition of the top hierarchy of the British Army. Here, out of sight from normal view and at least a half hour from the nearest settlement, more than 1,000 sorties were planned during World War II. The military intelligence and commando groups SOE (Special Operations Executive) and SAS (Special Air Service) were both established here.

“More than 2,000 commandos were based in Inverailort. Also located here were the American Strategic Special Forces, which later became the CIA,” said Corrigan.

Among these commando soldiers was David Niven, who later achieved fame as an actor, among others in the movie classic “The Guns of Navarone”.

Sniper Alley
Two years ago Marine Harvest opened a massive, new hatchery on the site of where the old research station once stood. Just behind the hatchery during World War II was a training area for marksmen that also included Norwegian commando soldiers; aptly called Sniper Alley.

Explosives as fishing tackle
Fishing was done with the aid of dynamite, which was both effective and amusing, but also caused a great deal of damage to spawning areas and subsequent generations of salmon in the river.

“When the troops left here, they dumped grenades and ammunition in the sea. Only last year we had to call in the bomb squad to defuse a large grenade,” said Corrigan.

Logistics for the narrow loch are awkward.

But Ardnish, which even to this day is the world’s most visited marine farm, has long been the object of much attention.

In 1974 Prince Philip, the Duke of Edinburgh visited the site here.

“We have maintained relations with the Royal family, and we are the only ones that deliver fresh salmon to Buckingham Palace,” said Corrigan with obvious pride.

During Queen Elizabeth’s 60th Coronation Anniversary celebrations in 2013, Corrigan, his boss Steve Bracken and a handful of staff at Lochailort were invited as guests to Buckingham Palace in London. For the past three decades The Royal Warrant seal has adorned Marine Harvest’s fish boxes.

“My father was a stoker on the steam train that runs between Mallaig and Fort William,” he explained. “Mallaig was formerly a prosperous fishing port, and the steam trains could haul more than 100 wagons loaded with herrings from Mallaig to London.”

The vintage train still operates between Mallaig and Fort William, but only in summertime – with the carriages full to the brim with tourists. There is no longer a landing depot for herring in Mallaig.

According to Corrigan, “it’s no longer a fishing community; but a fish farming community.”

The local community means a lot to him. On the conference table in front of Corrigan lie a yellow and a red card. He is an enthusiastic football referee, who uses these cards not just at a football match but in business meetings – as a way to impose a time limit for speaking.

Growth
Marine Harvest’s position in the community also plays a part in setting the boundaries for further growth – and further growth is decided by access to sites.

“We have a team for identifying new sites. That has to be done in collaboration with the local community,” he said.

Several parties are interested in sea acreage on this side of Scotland, particularly the tourism industry.

“Tourism is important, so we must work together,” he said, also mentioning sustainability as a keyword. “In my opinion salmon is the most regulated of all the food industries in Scotland.”