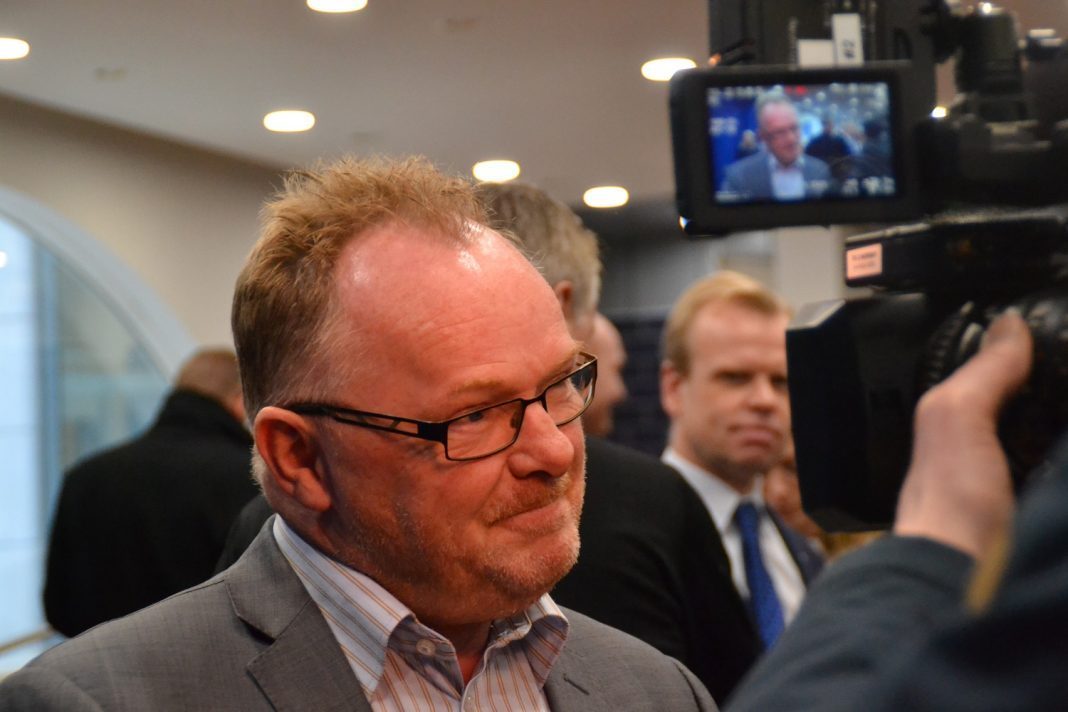 As Norwegian Minister of Fisheries, Per Sandberg will not be remembered for what he achieved, but rather for who he was.

It ended up as a complete fishy fiasco. A show so spectacular it has had both academic and national media/press leapfrogging over this summer’s silly season. Who needs revues, Netflix or spy novels, when we can instead keep abreast with how the fisheries minister is spending his summer holiday?

The short version is that the newly divorced fisheries minister Per Sandberg had, during last spring, found himself a new girlfriend. Not exactly a ‘girl-next-door’ type either, but a 30-year younger beauty queen and former asylum seeker – who had fled from a potential forced marriage in the cleric regime-ruled Iran.

On top of this, his girlfriend, Bahareh Letnes (28), had registered her own company for fish export, but according to Sandberg has not sold as much as “a toothpick”, which enabled the fisheries minister to easily spurn suggestions of a conflict with impartiality.

Sandbergs scorned ex-wife, Linn Miriam Sandberg, a parliamentary secretary in the Ministry of Health and Care Services, had already in May sent a note of concern to the office of the Prime Minister that “foreign powers” had moved in with the fisheries minister.

According to Per Sandberg his plans for a summer holiday in Turkey were “pulverised”, due possibly to an alleged leakage at government executive level to his ex-wife. Sandberg obviously had no confidence in the prime minister, and therefore chose to not give prior notification of his new holiday destination – Iran.

Sandberg protested that it was not the fisheries minister, nor the deputy leader of the Progress Party that travelled to Iran – it was Private Citizen Per Sandberg, nothing more nor less. However, he decided to take his official work mobile with him – to a country that Norway has classified as one of three high-risk regimes, especially notorious for advanced electronic surveillance. It has since emerged that Sandberg ignored PST’s (Norwegian Intelligence) security directive, and also had chosen to take his work telephone with him on a previous official government trip to China. Thus only Russia was left on the high-risk list.

In a country where women can risk incarceration as punishment for appearing in public without hijab, and for socialising with men they are not married to, Letnes was herself able to report from the Persian summer holiday via Instagram. Pictured standing close together, without hijab or burkha, with Private Citizen Per Sandberg. You don’t need to have seen many episodes of “Homeland” or “Le Buro” to smell something fishy going on and suspect connections to the clerical regime in Teheran.

All this became too much to allow Sandberg the benefit of the doubt. Yesterday he resigned from his ministerial post.

Political top celebrity
Enough about the private person Per Sandberg – and his fall from the lofty heights of power. What can be said about the fisheries minister Per Sandberg?

When PM Erna Solberg appointed him as fisheries minister after Elisabeth Aspaker, in December 2015, he was the highest profiled politician to take on this office – at least in modern times. Sandberg, as deputy leader of the Progress Party, was – and still is – a prominent political personality. He has been explicit and controversial for many years, and he continued in the same manner in his new office.

But once the ‘rush’ of enthusiasm had settled down, and judgment made of what the minister had achieved, rather than of who he was, the gaps became longer between the highpoints.

He has not managed to increase the country’s salmon production to any noteworthy extent. In that two-thirds of the industry’s export revenue comes from one fish species, the farmed salmon, this has had decisive significance for both value creation and results.

The most sensational action from Sandberg in his first year as fisheries minister was the scolding he gave the editor of Fiskeribladet (owned by IntraFish Media), which had offended his honour, after the latter had reported incorrectly that Sandberg was suspected of corruption for allegedly having given a fishing quota to a close friend and neighbour.

In Sandberg’s administrative period a handful of development licenses have been given seal of approval for some spectacular steel constructions that shall boost capacity for innovation and energy for the Norwegian aquaculture industry. Having said that, this was not Sandberg’s work, but rather a legacy from Elisabeth Aspaker.

Sandberg also organised an auction of new production growth, which resulted in €200 million dropping into State and municipal coffers.

Controversies
In Parliament, the tax and duty-allergic Sandberg has fought tooth and nail against the Opposition’s proposal on export duty, marine acreage duty or resource interest. What the final outcome will be from these is not known, and is a challenge that newly appointed Harald Tom Nesvik will have to battle with.

Controversies have followed in Sandberg’s wake.

One of these was when Sandberg had allegedly given Norwegian Seafood Association lobbyist Frode Reppe his private e-mail address after a meeting, an action that later escalated into a media storm, court case and the firing of Reppe.

It is thus conflicts and not political achievements that is Sandberg’s legacy.

In his defence, it has to be said he didn’t get much time to actually make a mark. Just two and a half years in the minister’s chair. But it was fun while it lasted.

Now the seat at the King’s table has been taken by a Western Norwegian, Harald Tom Nesvik, directly from a director position in the wellboat company Sølvtrans. Nesvik has the CV and hopefully the knowledge base in place to get to grips with the fisheries and marine farming industry’s most precarious challenges, and there is reason to hope that he will achieve more in constructive terms than his predecessor.