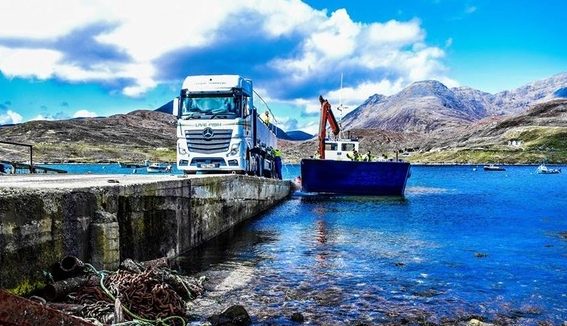 Paul Armstrong-Wilson, the owner of live fish transport specialists, Solway Transport and Fish Express, move salmon at all stages. If you eat farmed salmon there’s a fair chance that it’s probably been in one of his trucks at some point.

The company has exclusive contracts with Marine Harvest, Scottish Salmon Company and Dawnfresh among others. They also transport stocks of hatchery reared lumpsuckers for Benchmark’s FAI Aquaculture.

A farmer (on land) by trade, Paul Armstrong-Wilson started a livestock transportation business in 1982 with one truck when a friend suggested he get involved in fish.

“My friend had a HGV license after leaving the army. He said why not get a lorry. So we had a few fish farmer contacts and I used my knowledge to support him. I eventually bought the business off my friend, who set off to open an oyster farm in Tasmania,” he said.

Based just north of Carlisle, with satellite bases at Fort William and Crieff, today Paul Armstrong-Wilson owns two out of three of the UK’s live fish transportation companies. He set up Fish Express in 2013.

Seven Mercedes Benz trucks of 25 cubic metres in capacity, as well as eleven rigid and articulated trucks ranging from 20 cubic metres down to three cubic metres are used to transport the fish. The trailers use a steering system called Tridec – the only ones to do so- meaning they can get big trailers in a tight spaces.

“We transport salmon in two parts. From the hatchery to the freshwater lochs (when they are at 10-40g). And then we transport them from freshwater to sea, where they are then transported to a well-boat and they go to the marine sites.

The company transport all around Europe including Ireland, France, Spain and even Switzerland.

“Once we transported five loads of parr there. A group of Swiss investors have built an re-circulation salmon farm there in the middle of the Alps.”

Brexit
With Britain poised to leave the EU in 2019, and the real possibility of it leaving with “no deal Brexit” SalmonBusiness put the question through to Paul Armstrong- Wilson if he was concerned about the future when it came to new border rules?

“We transport all around Europe. Our only paperwork we have to worry about is about our compressed oxygen for the fish (the fish company will always have done their paper work). But when I was in Switzerland, which isn’t in the EU, we had to do a lot of export paperwork. It was very complicated so I personally drove out myself to make sure everything was in place. One thing you do not want to is to be held at the border with live fish.

“Looking ahead, if freedom of movement isn’t included in the Brexit deal, this extra layer of paperwork could potentially happen all around Europe. We would need some safe passage reassurance,” he added.