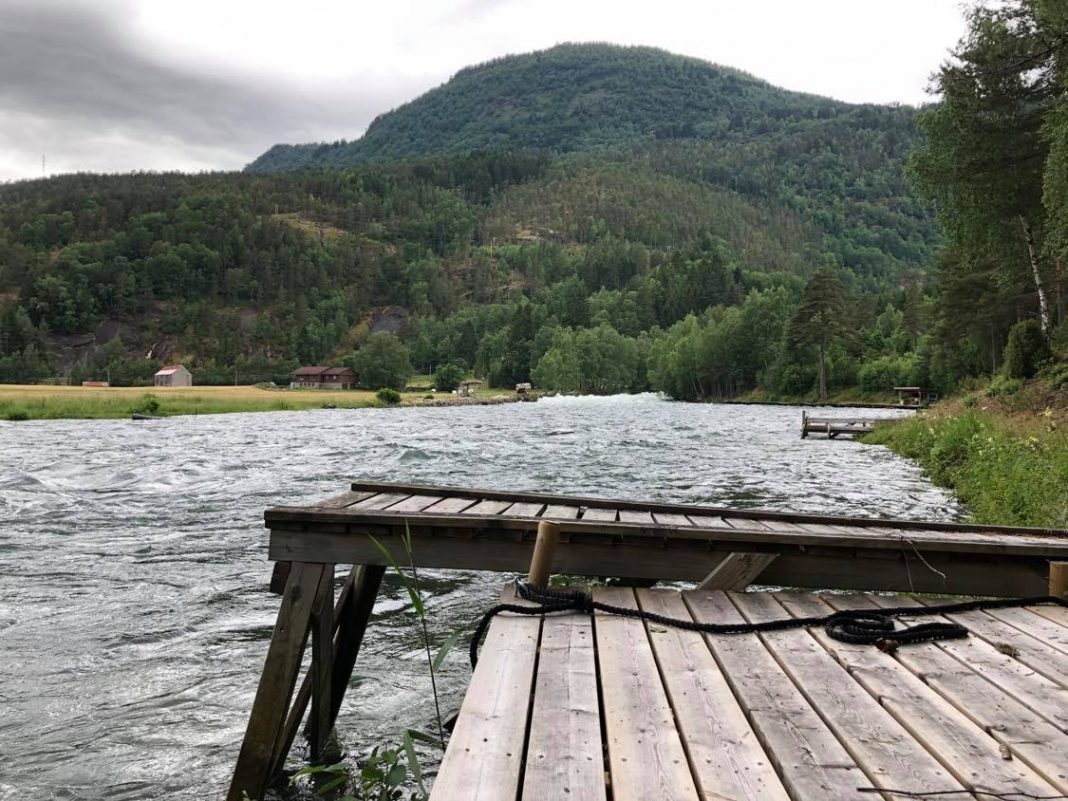 The exclusive big salmon river at Sogndal, Western Norway, is central to the Mowi strain.

When Mowi started farming salmon in the late 1960s, it was based on broodstock from Oster and Hardanger fjords in Western Norway. The systematic focus on a breeding programme was only put in place later. Then broodstock and roe would be sourced from the Vosso, Mauranger and Årøy rivers.

“The salmon strain here is known to be large-grown, relatively late and have a long stay in the number of sea winters,” river owner Arnt Munthe told SalmonBusiness.

Development
The hatchery, just off the banks of the Årøy River – a short but powerful river well known for big salmon – was brought up at the end of the 1970s.

“The hatchery had the first stage of construction in 1979, and then several stages of construction came after the early 1980s. Part of the basis for development was that we had regular customers in the aquaculture industry. We had 60-70,000 smolt as annual production, and it was no more than to cover 3-4 salmon farms. Today, one will only laugh at a farmed production of 60-70,000 fish. Now you have to have millions of people.

“Nothing was organised in the smolt production in the fish producers’ association. It was annual price negotiations. It has gone from pioneering level and developed into a large industry – for good and bad,” he added.

Today, the hatchery produces 8-10,000 smolt, solely for its own need for cultivation in the river.

Breeding work
“Our strain here is dominated by 2-3 sea winters, and relatively few one-sea winters, i.e. test gene. They built up the breeding station at Sunndalsøra and based it on their own roe production. Here the facility was built for a significantly greater activity than for its own needs,” Munthe continued.

“Later it became the solution to which one went over. But well into the 1980s we had deliveries of wild smolt to facilities in Brekke and Lifjorden (Western Norway). The one who really caught the eye with Årøy river salmon was Erling Osland.

“I know there was some talk about breeding work, but it wasn’t until the mid-80s that it became a reality.

Several members of the Mowinckel family are said to have fished in the Årøy river, including one of the farming giant Mowis birth helpers, Johan Ernst Mowinckel.

“I can’t recall Mowinckel being prominent here, but he may of course have been with other Bergen families who rented here,” said Munthe, mentioning customer names like wealthy families such as Rieber and Martens.

Jet set
“We had no direct contact with Mowinckel. I know Denissof delivered some roe to Osland.

The exiled Russian Nicolas Denissof rented the fishing rights in årøyelva from 1921 to 1965. Among Denissof’s guests were hotel owner Charles Ritz and fashion icon Coco Chanel.

“It has been a huge development, both for joy and curse, I would say. In the beginning there was no salmon farm on every headland from Lindesnes to the North Cape. Roe was brought in from here and the Vosso River and other big salmon rivers for the material that is dominant in the market today. Now has a light manipulation and oxygen additive, so one gets smolt in six months. It’s gone from a natural product to an industrial product,” he said.

The hatchery operation was long central to the business in Årøy.

“In the beginning, people were crazy about smolt. It was a black market. Many, especially in Northern Norway, were willing to pay anything to secure smolt for their licences. For us, it was the mainstay purely economical. We made quite big investments here. The smolt price was 12, 13 and up to NOK 20 each. Eventually we were isolated here to only have self-production,” continued Munthe.

“We had deliveries to Årdal and Sunndal Verk as it was called at the time,” he says. Today, the aluminium company is known as Norsk Hydro. Hydro also owned the company that is now known as Mowi, after a long period of company names such as Hydro Seafood and later Marine Harvest.

Reinforcement
“The hatchery idea was also the English who brought with them. The first was built around 1865. It was on the other side of the river. The second in 1936. The English had been doing artificial hatching. They thought it was necessary to do some reinforcement. We’ve continued it, and without it today, the salmon strain probably wouldn’t be of the level it has become now. Then there are different perceptions about this with hatchery operation, among scientists there are divided perceptions, whether it has any effect or whether it can be negative. Without water power regulation and the aquaculture industry, which has a negative impact on wild salmon, it would probably have been possible to operate without cultivation.

“The Mowinckel we had contact with was Thor Mowinckel, who was head of Mowi in the 80s. I don’t think he was a salmon fisherman,” Munthe said.

Mowi management knew what characteristics they were following when they picked up salmon roe from Årøy.

“The paddle axis is visually short and powerful. It has an extreme fitness. And is an early spawn. They are often rolling around. The roe can also be huge,” Knut Munthe Olsen, Arnt Munthe’s son-in-law, told SalmonBusiness.