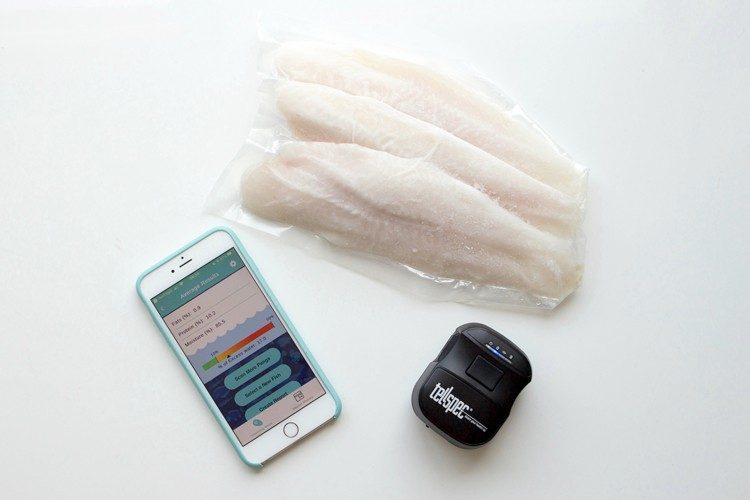 In August, SalmonBusiness reported Canadian consumers are getting duped en masse according to a national report from the advocacy organisation, Oceana Canada. The report found that roughly 44 per cent of fish and seafood across Canada was being incorrectly labelled.

Futuristic solution
Though Canada is far from the outlier. What if the salmon you ordered for dinner was swapped for a piece of farm-raised fish? Or what if it’s not even salmon at all?

Hot off the heels of winning the presitigous, European Institute of Innovation & Technology (EIT) Woman Award, which recognises outstanding women innovators, Isabel Hoffman, CEO of Tellspec talked to us how her small pocket sensor device may help detect seafod fraud as early as next year.

It sounds like it could something straight from the Starship Enterprise but it’s here – the world’s first “food scanner.” Canadian startup TellSpec’s handheld device scans your food to deliver accurate, real-time data about its chemical and nutritional content—including calories and potential allergens.

Raman spectroscopy
Using Raman spectroscopy, the TellSpec (which costs US2.200)  fires a laser into a given food item, measures the reflected light, and then sends the data to TellSpec’s cloud servers. There, the information is measured against reference data and run through a series of algorithms. In the final step, the results are sent back to the user and displayed via a mobile app. The whole process takes about three seconds.

“Tellspec has been in business for a few years and we currently have other applications than the Fish QC and Fraud application. With the same sensor, today we test for a variety of food including: fruit quality and control (Brix, Acidity and Waste), Vitamin C in fruits, melamine in baby formula, etc,” said Hoffman. “At the end of last year, when we became part of EIT Food we had the amazing opportunity to use our sensor and apply it to fish quality and fraud. We got EIT support to do this fish project; we couldn’t have done this without their financial support.”

Using cloud-based spectroscopy, TellSpec builds upon to existing large collection of food data and scans to support vast data gathering on the quality and authenticity of the food scanned from all points in the food supply chain. They use AI-based cloud analysis can that help monitor events of food fraud. The Fish QC and Fraud application will be ready next year.

Fish detection
SalmonBusiness asked if it could differentiate between farmed and wild salmon? And if so, were there any plans or conversations with the salmon farming industry?

“Yes, we intend to enlarge the current fish detection that are only for white fish to other fish in particular salmon and tuna,” explained Hoffman. “I believe we will be able to differentiate farmed from wild salmon, since farmed salmon has typically more fat and less omega 3, and those are two parameters we can easily measure. However, we have not done enough tests to scientifically confirm this hypothesis.”

In an interview with Food Navigator, Hoffman isolated four types of seafood fraud that the device could help with. First, if produce has been injected with water before being frozen, mislabelling, antibiotic misuse and fish that’s been illegally caught.

The con
But how do you actually detect different types of fraud in the seafood chain? The clever con can see cheaper fish being passed off or mislabelled as a more expensive type to boost profit margins, a blight on any company’s supply chain.

Blockchain
Hoffman said that she wanted to use the technology that underpins cryptocurrency to support the tech. “We are also working on integrating blockchain technology with our current fish app. This will help us track the origin of the fish and the full transaction history. This coupled with our sensor will also give a string marker for authenticity of the fish species” she said.

And just how disruptive do you think this will be? Can you take on the billion dollar fraud industry? “Very disruptive, since we would address the main global fish fraud practices including the IUU ( illegal unreported and unregulated).”