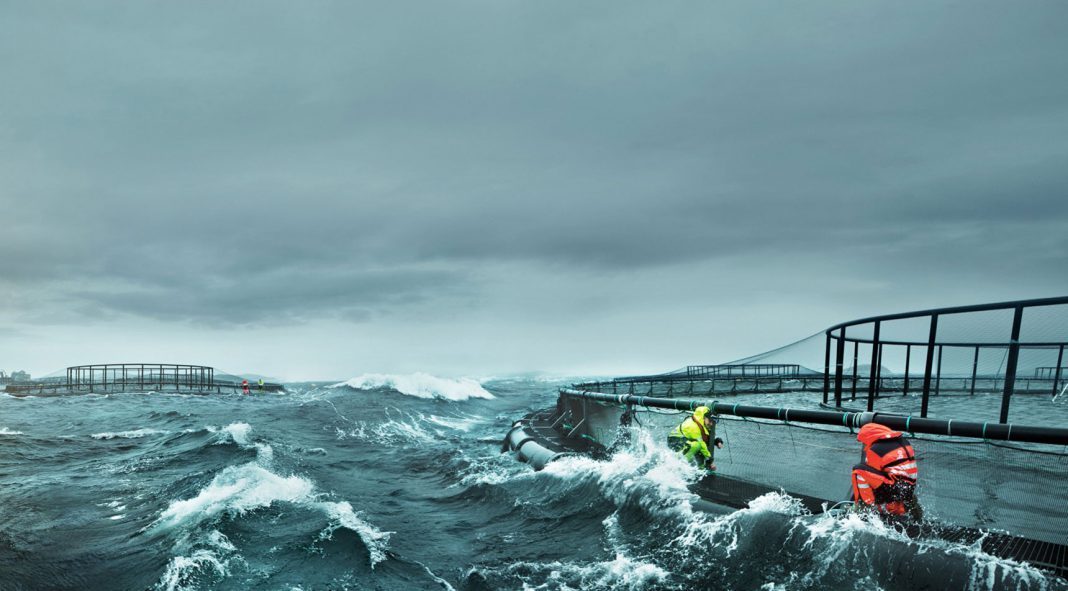 The year has started with a radically lower salmon price that what we saw last year. What does it mean?

Earlier today, SalmonBusiness learned of Marine Harvest’s downsizing of support functions and administration related to its activities on the Norwegian islands of Hitra and Froya. It’s the first tangible effect of costcutting that earlier this winter was camouflaged in the announcement of a reorganization of from four to three production regions.

The cost-cutting, in an industry that’s still flying high, is entirely unlike what was seen at Statoil ahead of the oil-price fall of 2014.

Belt-tightening
Production costs that have been run up to EUR 3-something make it hard comeby salmon surpluses like those seen over the last two years. The salmon price dipped below EUR 5 on Friday, EUR 2.40 lower than 12 months ago.

The outlook for highflying prices like those seen in 2016 and 2017 is poor. Last week the Norwegian Seafood Council ventured EUR 5.4 as an average 2018 prices. Today came the updated consensus numbers from 11 different brokerages, and their conclusion is EUR 5.60.

Price forecasts appear to be edging downward on those Excel spreed sheets, and the experienced analyst prefers to operate by looking in the rearview mirror.

Regardless — it all points to slimmer bottom lines this year compared to the exceptional past two years. So, what does that mean in practice?

Cost-cutting
Marine Harvest might be leading, but a range of other salmon-farmers already have already written cost-cuts down in their board minutes. They owe that to their shareholders and they owe it to their employees. Every foreward-facing salmon farmer should be equipped to withstand the heavy seas that can and will come in the future.

Fjordlaks owner Roger Hofseth forecast before Christmas that the “space projects” (bold offshore aquaculture ideas) would stop by themselves. He was in all likelihood referring to the many, creative steel constructions that have been tossed out into open view over the past two years. Once the Norwegian Fisheries Department in November closed the application process for development licenses, a limit was indeed in place. At the same time, we’ll soon be seeing that the dividend of capital-intensive sea farms, marine grow-outs and semisubmersibles will be trimmed by a lower salmon price.

Closed pens
A couple of year ago, former AKVA Group boss, Trond Williksen, stood at a North Atlantic Seafood Conference podium in Bergen and claimed it was possible to produce salmon on land for EUR 2.7 per kilogram. It wasn’t him but the advisors at Deloitte that had arrived at that magic number. Not many took the lure, then, and definitely not many today. It’s still difficult to find positive accounting numbers from land-based salmon, even with sales prices miles over the stated cost level. With reduced investment budgets as a function of lower salmon prices, the eagerness to finance both land grow-out and, likely, enclosed structures offshore, will abate.

The last five years have seen a six-fold increase in Norway’s workboat flotilla. The wellboat fleet has grown in the wake of the sea louse battle. There’s still a wealth of fish-farm service vessels in the yards’ orderbooks, although the odds are low that contracting levels will come down from the bonanza we’ve seen in recent years.

Normalized
Nordea Markets recognized before Christmas that the salmon party was over and that we’re about to experience normalized supply growth and earnings. That might happen, but it just isn’t reflected in the estimates of either Nordea or other brokerages that follow the sector. In a normalized market, Marine Harvest shouldn’t be trading at over EUR 10.3 per share.

Normalized earnings, historically, would translate into EUR 0.5 per kilo of salmon. Things aren’t that bad.

The party continues … but the music’s been turned down a bit.

That could be healthy.