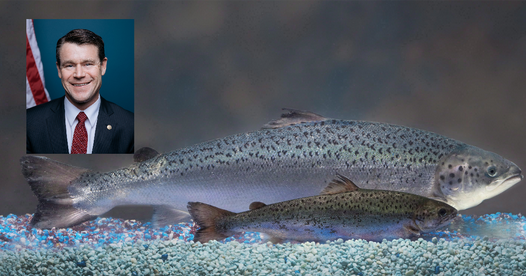 Hot on the heels of their 20 wait for FDA approval, the biotech company that produces AquaAdvantage salmon – a fish that can grow at twice the speed – has the support of the state’s senator.

Earlier in the month, SalmonBusiness reported that the FDA had deactivated a 2016 import alert that prevented GE salmon from entering the U.S.

In a feature for Starpress, Republican Todd Young visited the GM fish farmers land-based RAS facilities. Throughout the site, the senator was given a tour of its numerous 70,000-gallon tanks.

The company are waiting for FDA approval on two more products: a faster-growing bioengineered rainbow trout and a gene-edited line of tilapia.

Global Vice President at AquaBounty’s parent company Intrexon Bradley Shurdut, who was present at the tour, said: “Aquaculture is one sector of agriculture with a lot of head space in the U.S. to grow, and if we can show and demonstrate that we can do it in Indiana and in this plant, who knows where it takes Indiana in terms of growing into that headspace.”

“But also, it’s a nice foothold for the U.S. because right now we are at a deficit just in terms of this salmon right here.”

Afterwards, Young told the publication: “This is a job creator, a wealth creator, for the people of Indiana. This is a growing area of Indiana’s agribusiness portfolio and I expect it to really take off here in the future with this FDA approval of genetically enhanced salmon. Now we literally have an opportunity to feed millions, perhaps billions, of people in the future.”

He thinks once the public is educated about the controlled conditions at the Albany farm, “people will come to realize” the fish are healthy to eat.

They still have to convince Sen. Lisa Murkowski (R-Alaska) who, back in March, slammed the FDA’s decision as “wrong-headed.”

“I am not going to back down,” Murkowski said in a statement. “USDA’s new guidelines don’t require adequate mandatory labelling and don’t suffice as giving consumers clear information.”