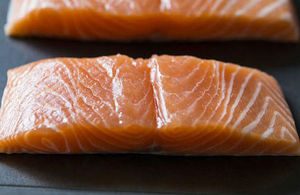 The “accident” enhanced its distinct colour.

According to the publication, researchers at the Norwegian Institute of Food, Fisheries and Agriculture research (Nofima) were investigating if the mineral, phosphorus that had been hydrolysed from fish bones could be used as an efficient source of the mineral in salmon feed. They found that this appeared to influence astaxanthin uptake ie the pigment that lends itself to the salmon distinctive colour.

The discovery of the improved pigment could prov essential for improving the appearance and the market value of the fish.