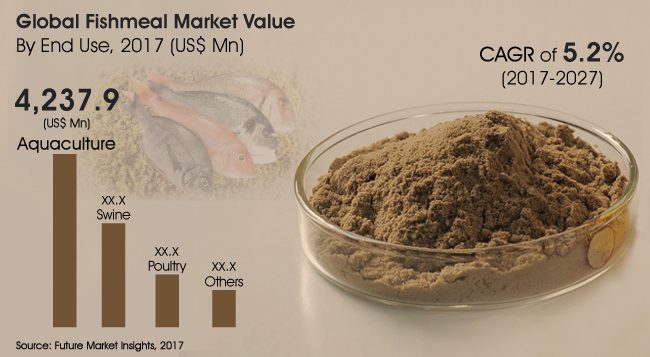 Another report related to fish feed — the third in a week — has again pointed to soaring market values, this time saying the global market for fishmeal will reach USD 10 billion by 2027.

The report’s authors at New York’s Future Market Insights claim to have processed the data from North America, Latin America, Eastern Europe, Asia, Japan and the Middle East and found that over the next 10 years, the fishmeal market is expected to grow at a 5.2 percent compound annual growth rate of USD10 billion from a value of around USD6 billion in 2017.

The fishmeal market in Western Europe and Asia Pacific, if not Japan, show “high potential”.

“By end use, the aquaculture segment is the largest, as it reflects higher market value of around USD4.2 billion in 2017 and dominates the global market,” the report says.

Apart from “the booming aquaculture industry” and feed innovations, the report makes reference to “rising demand for fishmeal among new, superior and carnivorous fish species” and “expanding promotion facilities” as well as extensive salmon aquaculture farming.

“High price fluctuations, increasing substitutes of fishmeal products and overfishing that has caused decline in production are posing challenges to the growth of the global fishmeal market,” the report concludes.

At press time, SalmonBusiness was awaiting a call from the report’s authors.

The following “key players” are profiled in the fishmeal report: