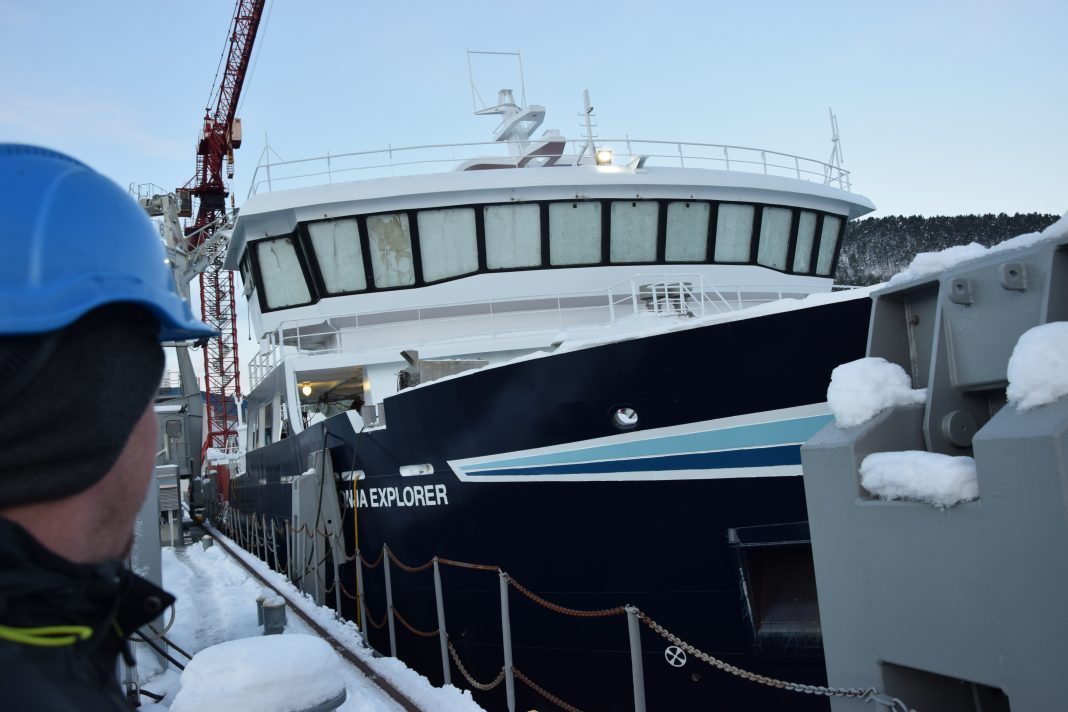 Administration manager Bjørn-Magne is the fourth generation boat builder in the family-owned Aas Mek.Verksted shipyard in Western Norway. The company has been continuously building wellboats since the mid-90s.

In the dry dock at the very end of the quay at Aas Mek.Verksted’s shipyard is Sølvtrans’s new wellboat, the “Ronja Explorer”. After the agreement, the vessel will be delivered on April 15th to Sølvtrans for five years who are leasing it to the duo SinkabergHansen and Emilsen Fisk.

Apart from the construction of the hull itself, which is done in Turkey, all boat work is done at Aas Mek.Verksted’s shipyard in Western Norway. Several holes in the hull are cut out and Bjørn-Magne Aas explains that this is to facilitate getting large equipment in place in the boat.

On the dry dock, a crane with a maximum load capacity of 7,000 kg goes on rails. The crane operator comes walking at the same time as the door of the steering house on the boat opens. Three men come out and gently move down the stairs. In many places, there lies a thick layer of ice and snow.

It’s not easy to see, but there are around 180 men working on preparing the wellboat.

“We have built between 55 and 60 wellboats now. There is a fairly large gap in the number of wellboats delivered from us and our competitors” said Bjørn-Magne Aas.

Huge development
The family business officially started on May 6, 1911. Their first ever contract was for a small 35ft wooden boat.

“It cost 1,500 kroner. There has been quite a bit development over the years. Both with price, materials, and technology,” recounted Bjørn-Magne Aas.

Although sizes have changed dramatically its perhaps the onboard systems that have undergone the greatest development. Aas Mek.Verksted has been a leading contributor on that front.

“Now the fish is swimming in and out of the wellboat without anyone touching it at all. We were the ones who delivered this system first, so we can safely say we have always been at the forefront of development all the time,” said Bjørn Magne Aas.