The climate threat is the major theme of our time. You can’t go a day without hearing anxious sounding reports on the news. The energy crisis this winter, which has shaken the whole of Europe, emphasises that there are no quick and easy solutions here.

Consumers, each in particular, must look within themselves and see what they can contribute. They can drive electric cars, cut flights, put on wool sweaters, drop plastic straws – or do something with their diet. For no other industrial sector leaves a larger climate footprint than what we are most dependent on – food.

An obvious answer to the challenge is to become vegan. But it is hardly an option for most people. Life is too short to settle for rice, nuts, fruits and vegetables.

Climate footprint
When measuring the climate footprint from the production of meat, fish and dairy products, it is first and foremost on the lining that the rub is. Half of all grain production goes to animal feed. Today, the world is home to about one billion sheep, one billion pigs, more than one billion cows and over 25 billion chickens. The animals need a lot of feed. Soy, corn, rapeseed, flaxseed, sunflower, wheat.

The climate footprint is largely dependent on feed conversion, i.e. how much feed is used to produce one kilo of meat. For cattle, the number is eight, pigs four, chicken 2.7 and fish 1.2. Unlike the mentioned competitors, fish is warm, it does not use energy to stay upright or warm up the body.

Ranking
This is the backdrop when Gunhild Stordalen and her organization EAT advocate for reduced consumption of meat, replaced by grain products, fruit, vegetables and fish.

The issue was raised during this week’s publication of the FAIRR Index. For the third year in a row, Mowi tops the analysis, which ranks the world’s largest listed animal protein producers on sustainability. The annual survey is the world’s most comprehensive analysis of ESG sustainability for producers of meat, fish and dairy products.

And it shows, again, that salmon farming is extremely sustainable compared to other protein production. Salmon farmers grabbed three of the top four places in the rankings.

FAIRR addresses a wide range of parameters, including antibiotic use, climate emissions, deforestation, animal welfare, waste treatment, water consumption, working conditions and food safety. In this year’s analysis, the jury has assessed 60 different protein companies, located in five continents, against each other. Fish farming companies score better than other animal protein producers on all measured risk factors, the report states.

Sustainable
The conclusion, that fish farming is the most sustainable protein production, has been difficult to accept for many. On social media, the activists, with varying agendas, have been working overtime.

But the criticism has been toothless. The relative differences are so great that they cannot be ignored. Yes, sticking to red meat rather than seafood is downright irresponsible.

Fish farming undoubtedly has its challenges. Salmon lice, escapes and sludge management are some of them, but when you look at what the big meat and dairy producers have to contend with, the differences become extensive.

Antibiotics have in practice been abolished in European salmon. Deforestation is not really an issue, although there are a couple of organisations that do their part to stick this on fish farming – even when there is an abyss between salmon and what most people have on their plate, namely meat.

Until you do finally decide to go vegan, meat, fish and dairy products will be on the menu. And then it will make a big difference whether you eat sushi or treat yourself to a juicy neck chop or a bloody steak. 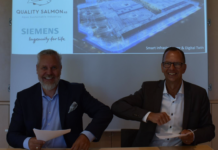 They want to build Europe’s largest land-based salmon farm, but the coffers are empty