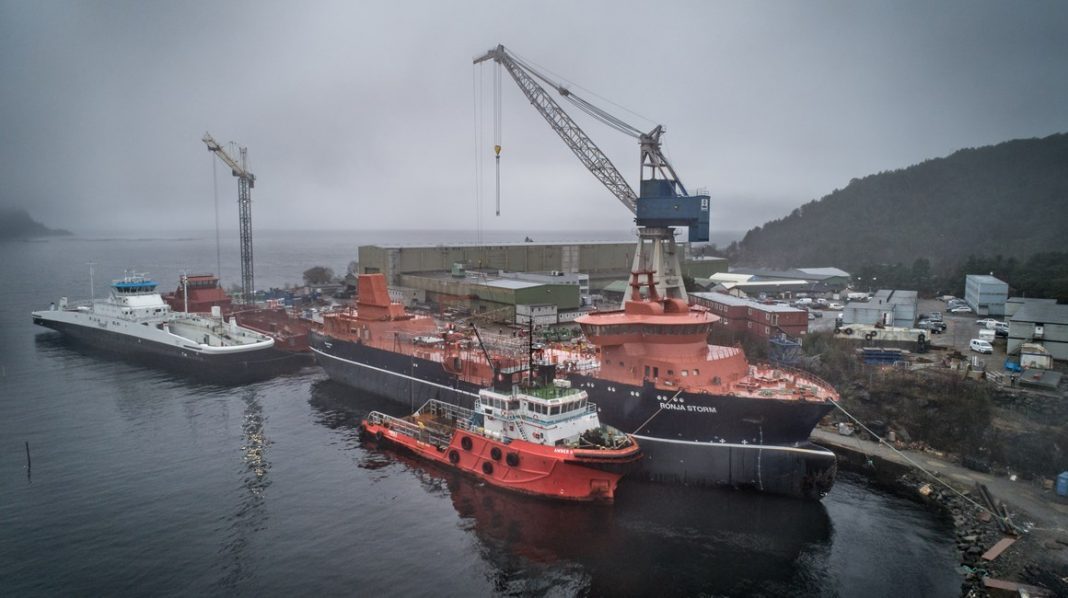 The hull of “Ronja Storm” has arrived at the Havyard yard in Leirvik, Norway, ready to become the biggest wellboat in the world.

At 116m, “Ronja Storm” is the world’s biggest wellboat. “There are also no other ships in the world that have such a big freshwater production facility,” Havyard wrote in a press release on Thursday aftertoon. “The boat can produce 16.8 million litres of freshwater a day, thereby potentially covering the daily freshwater consumption of 100,000 average Norwegians,” it added.

“Ronja Storm” will be delivered to Sølvtrans in autumn 2019. The boat will be put into use by Huon Aquaculture in Tasmania under a 10-year contract.

“”Ronja Storm” is the biggest in the world not only in terms of its actual size. The focus has been on thorough and reliable handling of large amounts of fish, which has required new solutions and equipment to be developed. Clients and end users have challenged us down to the tiniest detail, and the result is that “Ronja Storm” will be a giant in every way.”

Lasse Stokkeland, EVP Havyard Ship Technology, refers to the yard’s experience with building wellboats and says that they are ready: “We’ve been preparing for this for a long time, and we benefit from it being a complete Havyard product both in terms of the planning and building processes. We have full access to expertise in all fields when it comes to design, the fish handling equipment itself, and power systems and automation,” said Stokkeland

Sustainable
Ronja Storm is being built for Sølvtrans, which will rent the wellboat to Huon Aquaculture in Tasmania just off Australia. Kjetil Myren explains that the fish transporting and processing needs there require the large dimensions.

“The salmon must be treated and transported many times throughout their life cycle and bathing the fish in freshwater is an effective and environmentally friendly method. Producing our own freshwater makes the treatment more sustainable, as you avoid using natural freshwater, which is a scarce resource, you save time and fuel from not having to fetch it, and you don’t have to filter it. The water is of course reused as well,” said Myren

“When the salmon is treated that often, it must be possible to take them out of the cages quickly and with care to avoid stress and reduced growth. This is why such enormous systems are needed to handle the fish. To ensure fish welfare and survival, robust and redundant systems are also incorporated. Ronja Storm also has a direct current system, which is a first for a wellboat. This saves fuel and reduces noise,” he added.

The new flagship
Kjetil Myren said that Havyard has developed a new flagship in the wellboat industry.

‘We hope and believe that this will be a good tool for Sølvtrans and Huon Aquaculture in their work to produce healthy seafood. With the solutions we have used for Ronja Storm, we are delivering the next generation of wellboats and have taken another step towards an even more sustainable industry,” added Myren.

Sølvtrans CEO Roger Halsebakk said that they are very satisfied with the process so far and with the cooperation with Havyard, and he is certain that they will receive a vessel as planned that meets the expectations: “It will be a fantastic addition to Sølvtrans’s fleet. The ship once again confirms that Sølvtrans is at the forefront of technology developments that address quality, animal welfare and environmental considerations in the aquaculture industry,” he said.