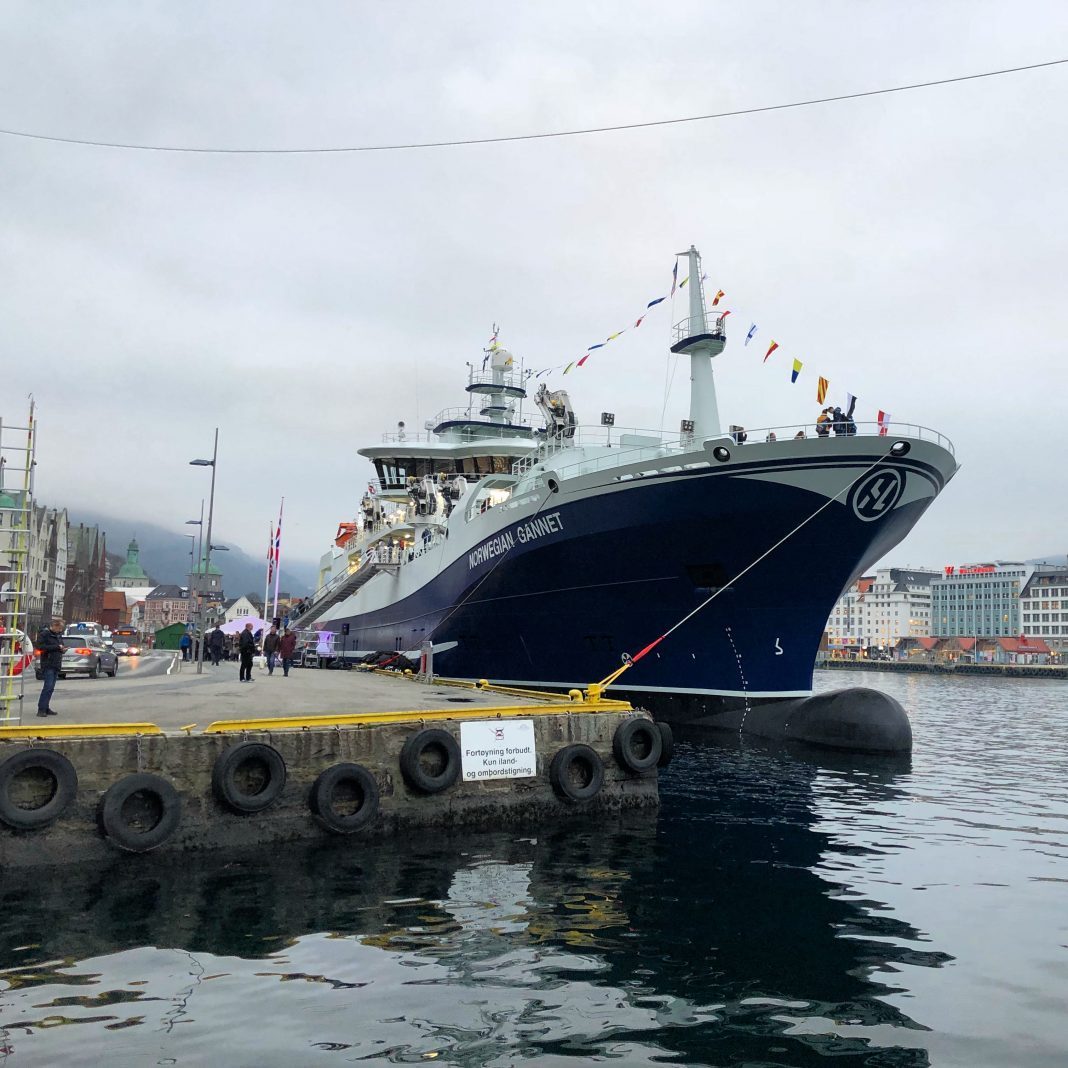 It’s something completely out of the ordinary. Now the harvest vessel has been christened for a second time.

As she she lay moored at Bryggen in Bergen, Norway, it caught everyone’s eye. “It’s a harvest vessel for salmon” one of the newly recruited crew had to explain to two young Asian tourists.

Together with a few hundred people, they had boarded the “Norwegian Gannet” and explored the maze of rooms, cabins, stairs and lounges. They had seen the bridge, harvest and machinery room, living room and booth, as well as a cinema and lounge with bar.

Equipped with 14 large lubricators, it has a significantly larger capacity than any proccesing plant in Norway. Theoretically, the “Norwegian Gannet” has a harvesting capacity of 160,000 tonnes of salmon per year.

Innovation
It is precisely this ambitious and bold innovation that drawed in so many curious, not least in and around the aquaculture industry, during Saturday’s open ship, in front of the ceremonial ship ceremony that afternoon.

Among the promoters were sizes such as Helge Møgster, Gerhard Alsaker, Jon Hindar, Coast Seafood Duo, Martin Øvrebø and Sverre Søraa, to name a few. The “Norwegian Gannet’s” length, 94 meters, and 4,000 tonnes of space, gives enough more than SalmonBusiness reporter a “ferry-boat like” feel. It’s a bulky but there is plenty of space.

By the leader, the red carpet was rolled out. Although the “Norwegian Gannet” was already christened in the shipyards city of Zumaia, on the Spanish side of Biscaya Bay, the two shipping families wanted to arrange baptismal festivals in the hometown of Bergen.

Short process
The vessels’ “godmother” is Anne Hvistendahl, Head of Fisheries and Aquaculture Section in DNB. She made a short speech and smashed a champagne bottle on the side of the side.

“I christen you, “Norwegian Gannet”. Good luck follow you on all seas.” She did not say much more.

“That was it. We had not really planned anymore,” said Director-General Carl-Erik Arnesen, almost apologetic, before presenting “Norwegian Gannets” ship officers to the public and photographers.

“It feels good. We have been waiting for this for a long time,” said shipowner Bård Sekkingstad, smiling before he and his audience hurried onto the reception and party at Radisson Bergen.

“It is exciting. We are incredibly excited. It’s nice to get it running. It has been a long round” said Endre Haugland, who is he son of 50% owner, Kjell Haugland

“There are large volumes, a big factory, and a lot of stuff that needs tweaking.”