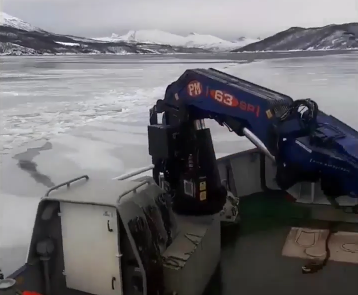 Øyvind Bekkavik, general manager of the Mid-Norwegian Coastal Service, believes that the ice challenges in the area around Mowi’s frozen sea pen in Kines, Nordland, Northern Norway, are over.

The icebreaker «Amron» arrived at the Mowi’s site at 04.30am to Wednesday. The boat was commissioned by Mowi to solve ice issues which created problems in daily operations.

“The crew is sleeping in shifts,” wrote general manager Midt-Norsk Kystservice general manager Øyvind Bekkavik in an update to SalmonBusiness, in reference to the 24/7 work staff had been doing to break up the ice themselves so that they could feed the fish.

10-15cm thick ice
According to Bekkavik, there was a lot of ice around the locality, and the thickness of the ice was about 10-15cm thick. On Tuesday, Mowi told SalmonBusiness that they want to have the ice removed before the mild weather comes at the weekend.

“The area around the plant is almost ice-free now, and “Amron” and the crew are now driving and removing the ice from further up the fjord,” added Bekkavik.

Bekkavik said that when “Amron” breaks up the ice, the large ice flow must be broken up before it hits Mowi’s facilities.

“So “Amron” has to go a little back and forth. The crew is talking with farmer on site, who are there with their own accompanying boat,” he said.

He said that that the situation will be solved thanks to skilled employees from both the Mid-Norwegian Coastal Service and Mowi.

No damage
Bekkavik said there has been no damage to nets, equipment or to the fish. For a while there was a danger that ice cages could break the cages, and Mowi had to watch the site 24 hours a day.

“It seems that it has gone well and that they have taken the necessary precautions,” concluded Bekkavik.

Video from the area taken around 10 am Wednesday morning.