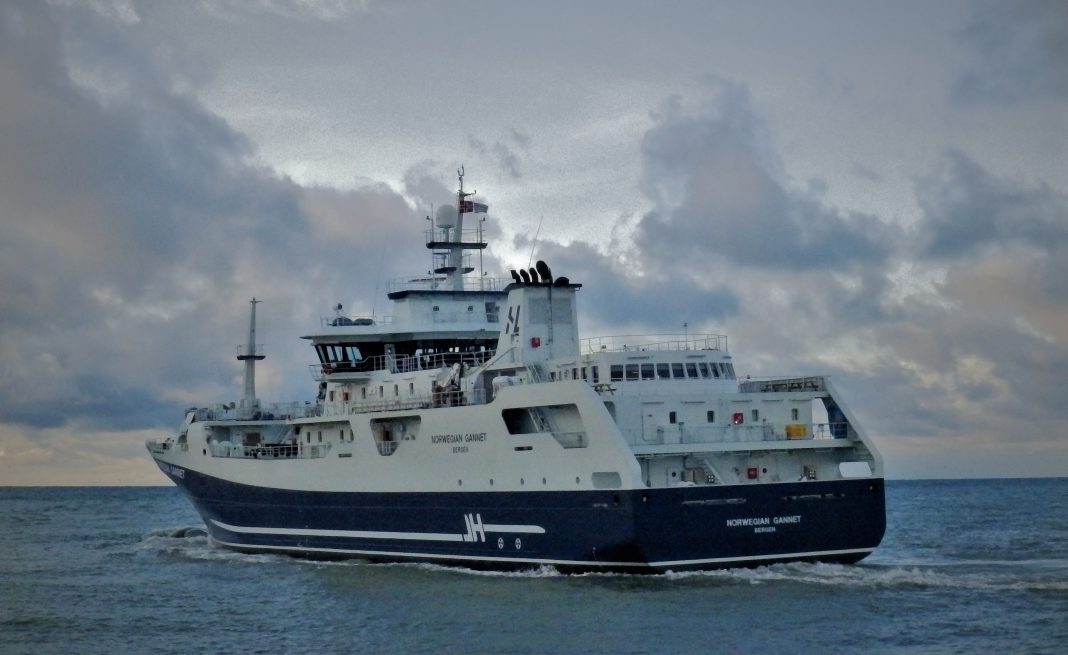 The “Norwegian Gannet” – the world’s largest floating salmon processor – was sent on its second trip to Scotland to collect fish from the world’s biggest salmon farmer. Mowi’s current processing space is “at full capacity and doesn’t allow for additional fish volumes during peak months”.

This week, the so-called harvest vessel was sent on a trip to Mowi’s site at Ullapool, the Hebrides, Scotland, to collect harvested fish.

Theoretically, the “Norwegian Gannet” has a harvesting capacity of 160,000 tonnes of salmon per year – which is more than what Scotland produced in 2018 ie. 150,800 tonnes.

Hav Line, the shipping company that runs the “Norwegian Gannet”, has so far this year harvested and delivered more than 14,000 thousand tonnes of Norwegian salmon to the company’s packing plant in Hirtshals, Denmark.

Additional volumes
“As we have previously reported, our current processing space in Scotland is at full capacity and doesn’t allow for additional fish volumes during peak months. We had been processing additional volumes in Ireland over the past months and are now processing some volumes in Denmark during peak volumes. We continue to work with our employees in Scotland to create a long-term solution for fish processing at Mowi that will accommodate all our requirements and future growth,“ wrote Mowi Director of Communications, Ian Roberts, in an email to SalmonBusiness.

Distruptive
Steve Walker from Hull-based Prime Processor, a salmon processing company, said that he wasn’t worried about the prospect of salmon farmers letting floating processors harvest fish. He said: “We fillet and pin salmon here, whereas they will just gut it on board. It won’t affect us.”

“If the Norwegians want to process more – that means higher volumes which are of more interest to us as we will have more fish to transport. I can see salmon farming going the same way – all using similar “Norwegian Gannet”-style vessels,” he said.

“On the West Coast, communications and roads are quite bad. Also, there is no prospect of a motorway between Glasgow and Fort William. It could be a win-win for the industry with a hell of a lot fewer lorries on the road,” he added.