Salmon has many things working to its benefit as a protein option such that it would take more than high prices for consumers to start walking away from it, an industry analyst suggests.

Recent record-high salmon prices may have prompted discussions about a “consumer breaking point” – the price level at which consumers start walking away from salmon – but senior industry analyst Gorjan Nikolik at Rabobank International said these discussions might overlook some key points.

“I don’t know at what price this is but there are two key points to realize, first: the consumer does not face wholesale price volatility due to contracts with processors and due to the variable retail margin – the price increases at consumer level are a fraction of those of whole fish at wholesale; and second, we need to see salmon prices in relative terms: all proteins are more expensive and, beef products, which are closer to salmon in price point, have actually increased more,” Nikolik told SalmonBusiness in an email.

“We may see a salmon demand drop in H2 2022 but this is due to recessionary dynamics and not necessary a too high price at retail,” he added.

The market will adapt
Brad Hicks, a partner at Taplow Feeds of British Columbia, noted that the disparity between the prices of salmon and beef works in salmon’s favour.

“There is currently a strong demand for salmon, and the price is increasing, but not a lot more than beef. There is always the risk that the price will go too high and alienate some customers, but generally if this happens and the market slows, a drop in price will bring the customers back.”

Hicks adds that the food service sector and retail stores have strategies to help consumers get around high salmon prices.

“They could make the portion size smaller to compensate if the price gets too high. People will just eat less. Steaks used to weigh a kilogram. You would have difficulty finding a 1-kg steak at the moment. The same will happen with salmon. Half-fillets or even smaller portions will become the norm.”

He said the deflation in portion sizes as prices rise has already happened with halibut.

“Because the price of halibut is so high, the portions for sale are very small. My experience in the market is very honest and very real. If the price becomes too high, people who prefer to eat salmon will still buy salmon – just less. Some others will look to other fish, but most of the desirable fish species are also escalating in price.”

In Vancouver, anecdotal evidence suggests consumers still make a beeline for fresh salmon at Costco stores (the warehouse giant declined to give SalmonBusiness sales figures), suggesting the price is not a deterrent, so far. 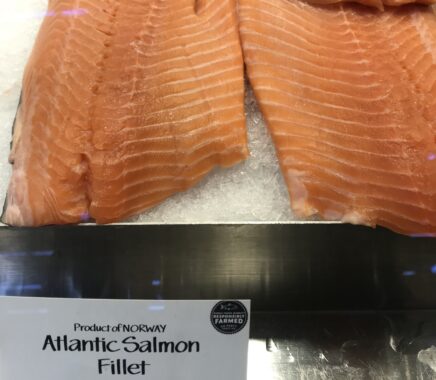 In Perth, chef Tessa Tayag observed salmon portions with skin on at Woolworths supermarket were “on special” for US$20.27 per kg. This is higher than the US$18.55/kg she used to get them at discount, she said. “But I haven’t seen salmon on special for three weeks now since the price increase,” she said.

What salmon offers
But salmon’s advantage as a healthy, sustainable protein adds to its desirable qualities, so health-conscious consumers may stay loyal.

At educator Johnny í Grótinum’s TV show in the Faroe Islands this past Wednesday, Nikolik said salmon ticks the boxes that Millennials – today’s the biggest spenders in food in Western countries – want in their food.

“This cohort’s emotional connection to how food is produced is much higher than that of their fathers and their mothers, which are the Baby Boomers. Their impact on the food industry is now the strongest, and it will be for the next 10 years. They actively seek information about the food that they consume. They are credited for the rise of craft beer,” said Nikolik.

He said salmon rises above other proteins when it comes to the two key issues that the animal protein sector is dealing with: antibiotic use and animal welfare.

“We don’t use antibiotics anymore in the salmon industry as we have developed vaccines for most of the known diseases. That’s not saying that we don’t have any problems, we do, but at least we’re not solving them with any antibiotics, which is now a big issue for many of the consumers.”

Further illustrating the point on animal welfare, Nikolik said that in the poultry business, the animal is ready for slaughter when it reaches 2 kg at six weeks old, while salmon reaches maturity at 2.5 to 3 years. “A salmon at six-week-old is like, maybe 2 cm long. It’s a half the size of your finger,” he noted.

When it comes to living conditions, in pig farming, each pig has “about a bit less than one meter square” to move around. In the poultry industry, at least in the EU, “the norm for retail is 20 birds per square meter.” In salmon farming, each pen is roughly 1 percent salmon, 99 percent water.

“Salmon are also what we could call all salmon free-range protein because they have the same type of space as the cows roaming free in the Australian outback,” he said.

“Quite frankly, on every measurable aspect that we can find, the salmon industry is more sustainable and more animal friendly product than other animal proteins,” he said.

So, based on the characteristics of this new consumer, Nikolik said, “Salmon has all the parameters that we discussed – the two key ones being antibiotic use and animal welfare – that will immediately trigger an emotional reaction.”

Salmon has grown to become the second most popular seafood in the United States in the past 10 years, following shrimp.

“It is a uniform aquaculture product with no seasonality. It can be processed and brought with a fresh value chain to all countries in the West, whereby local processors can adapt that product to local consumption. In Germany, if they like a smoked product, that’s what they get. If they like fillet in in France or some value-added product somewhere else, that will be adapted locally. So it’s a very versatile, healthy sustainably responsible product. So, yes, it has a lot of good things going for it,” he concluded.