“Ask a child to draw a car, and certainly he will colour it red,” Enzo Ferrari once said.

Bright red Ferrari cars have been part of the Formula One landscape since the early 1950s. No racing team in the world can match the support, affinity and preference for Ferrari.

The brand is eclectically valuable. It is often called brand equity.

Enzo Ferrari founded the racing team as early as 1929, then as part of Alfa Romeo. From 1947 Ferrari built its own cars. The company, headquartered on the legendary Maranello, is the most winning Formula One team in history, which has been a key driver in its sale of exclusive sports cars.

Strategy
It has been three years since Marine Harvest changed its name to Mowi. It all happened during the carefully planned and choreographed event in Edinburgh. There, the company’s senior management also announced that it would launch its new brand, with the same name as the company, Mowi.

“We will invest EUR 35 million in this brand,” said Ola Brattvoll.

Brattvoll has long been talked about the value of category development and brands. Now the executive vice president for sales and marketing was given a major task. Brattvoll was to develop the Mowi brand, which would hijack the current open position as the salmon industry’s strongest brand.

Brattvoll had fronted the brand mindset, internally and externally, and the settlement with generic marketing against its old employer, the Norwegian Seafood Council. As a multinational company, and at the same time the largest sponsor of the Seafood Council (via export fees), Mowi had a clear conflict of interest with a strategy in which Norway as a country of origin was governing.

The salmon giant is aiming to earn EUR 1 billion from the Mowi brand in 2025.

“The brand will contribute 100 million euros in extra EBIT – and go cash break-even in 2022,” Brattvoll promised.

Prize price
Mowi was the company name of the world’s dominant salmon farmer in the 70s and 80s, and the name itself was then enough to bring in an extra EUR 0.5/kg in price premium. However, both the company name and the brand were scrapped by Hydro Seafood in the 90s.

In 2014, admittedly, Marine Harvest had relaunched the Mowi salmon brand in Asia. There was no success.

Four years later, another attempt was made.

On Wednesday, it was announced that Mowi’s own brand has now gone on sale in the UK. Sainsbury’s is the long-standing partner that offers the range of Mowi-packed salmon portions.

Behind schedule
During Mowi’s capital markets day last week, Ola Brattvoll had to admit that the company’s branding was probably somewhat off schedule, due to Covid-19 trouble, but the ambitions of EUR 100 million in extra EBIT by 2025 were maintained.

It is good that the company has finally got to launch the Mowi brand on Scottish home turf. It was high time. Here in Norway, it’s still not in fresh food counters, and that probably hasn’t been the plan either. But soon Mowi will start to have trouble if the company wants to reach that 2025 goal.

Because if one asks the management of Ferrari, or leading brand makers such as Coca-Cola, Marine Harvest’s founder Unilever, Adidas, Gillette or McDonald’s, they will probably all highlight that time, long term work and market investment over many years, is perhaps the main driver behind a strong brand position.

With four years to go until 2025, Mowi’s own set goal is looking quite naive. 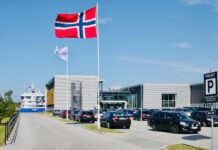