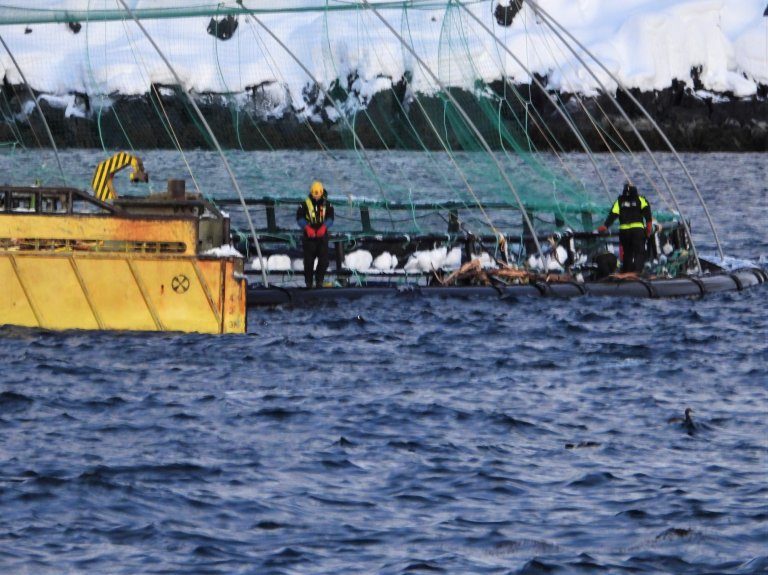 Norway’s Directorate of Fisheries and Grieg Seafood have given an update after the avalanche which hit part of a salmon farm.

No employees were injured. The site had a total of 1.2 million fish, with an average size of about 3.7 kilograms. The fish are healthy and do not have ISA, according to Grieg Seafood.

The site was also hit by an avalanche in 2018, prompting a mountain safety company to warn against the location. Grieg Seafood informed SalmonBusiness that the plan was to move the site in the summer.

Full inspection Tuesday
On Tuesday, the Directorate of Fisheries’s patrol vessel “Eir” took supervisory staff to the site, according to a press release.

“The supervisors are in contact with the site manager at the fish farming company. A full inspection of the facility will be carried out during the day,” the press release stated.

Grieg Seafood Finnmark received a safety assessment on Monday from a consultancy that observed the avalanche site from a helicopter. They have, together with authorities, concluded that it is safe to stay at the site. However, it is advised not to move inside the cage.

Grieg Seafood has therefore inspected several cages with ROV (underwater vehicle). The site has eight cages in total. Four of these are closest to land and the avalanche site.

“No holes have been reported. The rings look intact,” the Directorate of Fisheries stated in the press release.

Grieg Seafood also confirmed in a message that the nets on the four cages are without holes.

“We can establish that there have not been major escapes from these cages, but cannot rule out that individual fish that have swam all the way to the surface, washed over the cage when the avalanche struck,” said Grieg Seafood Finnmark public affairs manager Roger Pedersen.

Railings over water are broken and feed pipes are damaged. The company has also reported that two mooring chains in the anchoring system have been broken. They will go over and look at the entire anchoring of the site.

When the nets were put out on Monday, one farmed salmon was caught. The nets will also be out on Tuesday.